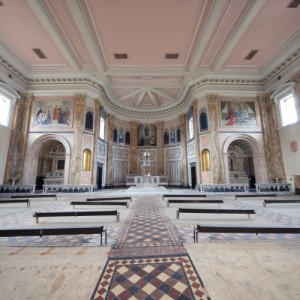 An appeal has been made to parishioners who attend a Limerick City parish as well as the local community for help in funding a new altar for the Sacred Heart Church at the Crescent, which it is estimated will cost some €6,800.

Canon Wulfran Lebocq of the Institute of Christ the King, which owns the church, explained this week that money is still being sought for the church’s restoration, estimated to cost some €100,000.

The Sacred Heart Church was bought by a developer from the Jesuit Order in 2006 and was almost turned into a hotel until it was purchased by the Institute when the developer died suddenly in 2010.

According to Canon Lebocq, currently some €6,800 is needed by the community, which he described as “poor” in order to “help install an elegant altar for the Glory of God and the admiration of all in the Sacred Heart Church in Limerick”.

The new wooden altar will replace the current “makeshift altar that currently sits at the top of our altar steps”.

Canon Lebocq said when they acquired the church “there were neither pews, statues, stations of the cross nor a tabernacle.”

“Thanks be to God and thanks to your prayers and support, the Sacred Heart Church is definitively coming back to life and refurbished for the greater glory of God. Our latest part of the restoration was the installation of a beautiful tabernacle and of 12 chandeliers.”

“Our community is poor, but does not see that as a sufficient excuse to refuse to produce something beautiful for the Christian faithful. After all, God is the source of all beauty,” he said.

The Institute of Christ the King bought the former Jesuit Church on the Crescent, following the death of a Galway developer.

However, the interior of the church, which is 150 years old this year, had been emptied of its liturgical furnishings, including the original altar.

“We hope that all lovers of splendour will be moved to donate to our next project. In helping us, they will be responsible in part for putting something beautiful back in the world,” said Canon Lebocq.

Some €200 has been raised to date through online donations. The blessing of the altar is scheduled for November 20 before the 7pm mass by Monsignor Wach, Prior General of the Institute.