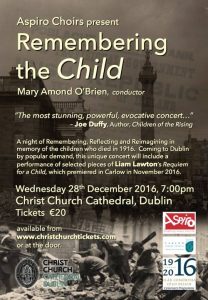 The ‘Remembering The Child’ concert includes music that Aspiro commissioned Liam Lawton to write. The music was premiered in Carlow at a concert, ‘Requiem For A Child’, in November. 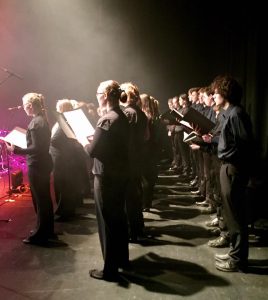 Aspiro choir, which joined Liam Lawton in Carlow in November.

Liam Lawton said at the time: “As part of the 1916 Celebrations I was privileged to be invited by Mary Amond O’Brien (Aspiro) to write some music for this special commemoration of this centenary year. What emerged is ‘Requiem for a Child’ in which I have taken various elements of the Requiem in the Latin, English and Irish languages to reflect the immensity of what happened to our children and what sadly is still happening throughout the world today.”

This new concert will mark the suffering of both the children of 1916 and the children and young people who are today caught up as victims of war and violence in our world.

In an effort to describe the significance of the event, organisers quote Leonard Bernstein who said: “This will be our reply to violence … to make music more intensely, more beautifully and more devotedly than ever before.”

Four Aspiro ensembles involving more than 100 singers and musicians, ranging in age from 7 to 80+ years of age, are performing Liam Lawton’s ‘Requiem For A Child’ as well as music from various composers around the world, including two Irish composers – Shaun Davey and Sue Furlong.

Excerpts from Joe Duffy’s Children of the Rising are narrated throughout the evening. Aspiro was inspired to create this performance event because of Joe Duffy’s stories about the young lives lost in the Easter Rising.

“He humanised the most vulnerable casualties of the Easter Rising through his research and written work,” stated Aspiro. “Remembering, reflecting and reimagining are the themes in this magnificent performance with Liam’s new work being the centrepiece in the ‘reflecting’ section.”

Organisers hope that through the power of the original commission, and through venerable and established music, Aspiro will evoke the memory of the 40 children aged 16 and under who were killed in the 1916 Rising.

Aspiro also wants to encourage reflection on the suffering and pain that children in the world today are going through in war-torn areas. In the final section Aspiro wants to inspire a ‘reimagining’ for a more positive future for Ireland and the world through what they hope is uplifting music.

Aspiro was formed in September 1997 by Mary Amond O’Brien to promote what she called “a world class model” for choral music education practice in Ireland. Aspiro now involves children and youth and adult choirs.

Mary Amond O’Brien is a native of Co. Carlow and a former international athlete. She was appointed Choral Director of RTÉ Cór na nÓg in September 2011. She has studied with world-renowned choral specialist and founder of Choral Music Experience (CME), Dr Doreen Rao. 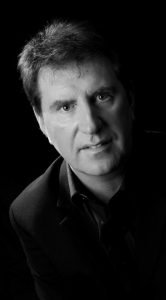 In July 2016 she co-directed ‘Celtic Voices’ international festival with Dr Rao in Carlow, Maynooth and Dublin. She has composed and arranged works for Aspiro and was commissioned to write for the Veritas ‘Alive O’ primary school programme.

Liam Lawton has been composing music for over 20 years, carving his own niche with music spanning the Sacred/Classical style. He released LUMINA Volume II in November – an instrumental collection as a follow-up to LUMINA Volume 1.

It includes tracks such as ‘The Glendalough Theme’, ‘Benedictus’, ‘Journey of a Soul’, ‘Heal us Lord’, ‘Labyrinth’ and many more.

The concert is at Christ Church Cathedral, Dublin, today, Wednesday 28 December 2016 at 7 pm.