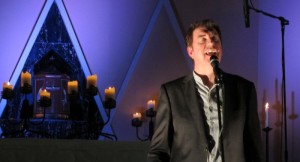 Liam Lawton’s  first passion is for singing and music, but he also has another passion – to make sure that everybody is included.

“I like to write music that is accessible and melodic that everyone can partake in.”

There is always room for choral music, Fr Lawton told CatholicIreland.net, but he believes even more in what the great liturgist Joseph Gellineau once said, “When one voice in the assembly is silent, the praise of God is incomplete.”

If we go by that, there is a lot of ‘incompletion’ particularly in Ireland, he said.

On Wednesday night he held a music workshop in Naas for members of local choirs to introduce them to his new collection of sacred music for use in the Mass.

The collection, which is entitled Eternal, features what the priest calls ‘service’ music which can be sung in parallel to the Glendalough Mass which came out with the revised missal.

The Glendalough Mass features music for the parts of the Mass (Allelliua, Great Amen, Holy Holy etc), while Eternal provides a new collection of entrance, recession, funeral and communion hymns. 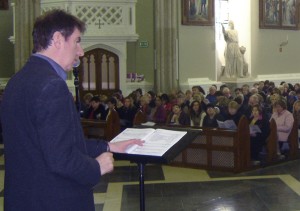 Around 200 singers attended the workshop in Naas, representing choirs from north Kildare.

Fr Lawton, battling a bad cold, led the singers through thirteen of the songs from Eternal – playing the CD track once to start, then singing each song, line by line, with the choristers repeating each line, before putting the whole song together.

Each participant had purchased the book of songs for €10 but there was no other charge.

The workshop lasted over two hours and participants were happy and enthusiastic leaving.

“It really lifts the spirits to sing together. It is a wonderful collection,” commented Eoin O’Connor from Prosperous.

Last night Fr Lawton repeated the workshop in Graiguecullen, and next week he will be in St Patrick’s Pastoral Centre in Cavan on Wednesday and Manorhamilton on Thursday.

Among the songs in the Eternal collection is ‘Breastplate’ with lyrics based on St Patrick’s breastplate.

Liam Lawton wrote the hauntingly beautiful song for the millennium, but then forgot about it. He says it is his own favourite in the collection.

He believes music has a role to play in teaching authentic Catholic theology. Much of  Christian contemporary music comes from house churches, and the Pentecostal movement – which is fantastic “because it  brings people to God” says Fr Lawton. 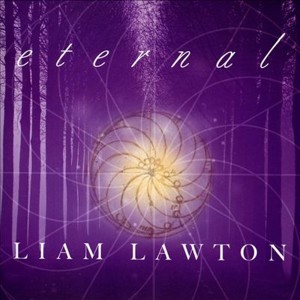 His  issue is that the theology centres on the ‘me – Jesus’ relationship whereas Catholic theology places a great emphasis on community: relationships in the family, the community of the local church, which is part of the diocese and the world wide church.

“The theology of Jesus is about looking after others. ‘Whatever you do to the least you do to me’ or the service he showed at the Last Supper.”

He laments the fact that the Church in Ireland has not put resources into publishing music.

He himself has his works published by the Gregorian Institute of America (GIA) but as it is US-based, they are not interested in publishing music in the Irish language.

“I think the Church should have its own music publisher,” he told CatholicIreland.net

Liam Lawton sees sacred music as part of a cycle of prayer. “Music leads to prayer and out of that prayer comes silence and out of the silence comes music again,” he says.

Eternal and other music from Liam Lawton is available from his website at: www.liamlawton.com