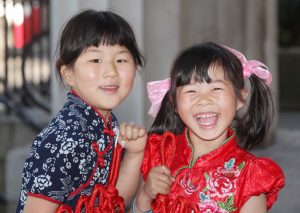 Mary He (6) and Helena Liu (5) at the Festival of Peoples. Pic John Mc Elroy.

Racism and xenophobia, ethnic intolerance and exclusive nationalism are all alien to a Eucharistic spirituality, Archbishop Diarmuid Martin stressed at the Festival of Peoples on Pentecost Sunday.

In his homily for the special liturgy at the Pro Cathedral in Dublin on Sunday, Archbishop Martin said the Preface of the Mass for Pentecost sums up the meaning of the celebration of the diversity of ethnic identity gathered within the one family of the Archdiocese of Dublin.

Archbishop Martin underlined that the Church is not just a collection of individuals, but a witness to how faith in Jesus Christ fosters the unity of all peoples.

“Anywhere the Church exists and celebrates the Eucharist it witnesses to the unity of all humankind, symbolised and nourished by the One Bread, the One Cup around the One Table,” he said.

Describing the Eucharist as a sign of unity, Dr Martin said that those who partake in the Eucharist witness to a faith which must constantly generate a new sense of the unity of humankind. 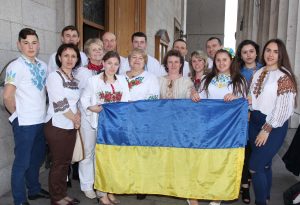 A group from Ukraine fresh from celebrating Ukraine’s win in the Eurovision on Saturday at the Festival of Peoples on Sunday. Pic John Mc Elroy.

“Today’s celebration is a celebration not just of diversity but of welcome, of belonging and openness to all,” he told the assembled representatives of the many nationalities who have made their home in Ireland.

“The demographics of Ireland have changed remarkably in a very short period of time. One has only to walk through the streets around this Pro-Cathedral to see how deep-rooted and embedded ethnic diversity in Ireland has become,” he noted.

The Archbishop said the roots of this demographic change had their origin to a great extent in an economic necessity for labour at a time of prosperity. “We needed workers,” he reminded Irish society.

“What we welcomed was not just labour; it was and is people, men and women, who contribute by their work and their cultures to a richer Dublin in many ways and not just though an economic input alone.”

In times of economic transition, he warned, there is danger that we would think of immigrants as disposable, as so many commodities and factors in our consumer culture are used or disposed of according to necessity or whim.

“Those who in Irish society contribute to our common good have rights to security by the fact of their human dignity,” the Archbishop reminded Irish society.

He also paid special tribute to the country’s schools which have done “extraordinary work” in welcoming the children of immigrants and helping them to develop truly as “Irish of dual culture” and thus contributing to changing demographics into a new definition of Irishness and of welcome. 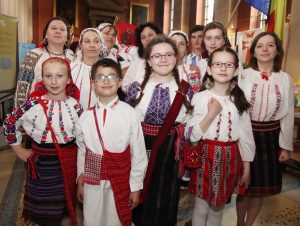 A group from Romania at the Festival of Peoples on Sunday in Pro Cathedral. Pic John Mc Elroy.

But he also underlined that ‘Irishness’ does not stop at national boundaries.

He warned that we are living in a world where the unity of all people is under threat.

“It is under threat if we as Irish or as Europeans close our eyes to the needs of brothers and sisters in dire need in our continent of Europe and further afield.”

“Today the numbers of those who are fleeing from war and persecution are on the increase and the level of solidarity is often inadequate.”

The Archbishop reminded the faithful that the Christian faith can never be “a passing-by culture when faced with distress”.

“Our Europe should never be a culture or a politics of passing-by or dong just what is politically easy to stomach,” he challenged.

“Apart from the noble commitment of our Naval Service in the Mediterranean, I have a feeling that here in Ireland the process of taking refugees seems to have been allowed to slip to the back-burner of politics, while citizens and communities have shown clearly their desire and willingness and anxiousness to commit to a culture of welcome.”

Elsewhere he also stressed that the Church is not “a spiritual supermarket where I can serve myself and top-up on means to save my own soul without ever speaking to anyone else”.

He added, “Gathering and sharing in the faith are essential dimensions of being believing Christians.”

With Pentecost the Spirit left to the Church the challenge to translate that sense of local gathering into something more global and to be in the forefront of spreading Jesus’ notion of “my neighbour” into a world that is ever more interdependent.

Inaugurated in 2005, the Festival of Peoples is a colourful, enriching celebration which marks the contribution that people from many different nations make to the life of the Church in Dublin.