Jackie O’s letters to Irish priest to be auctioned 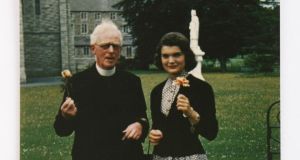 Jacqueline Bouvier and Fr Joseph Leonard in All Hallows in 1950. Pic: Irish Times

A stash of letters written by the notoriously private US First Lady, Jacqueline Kennedy, to an Irish priest over a period of fourteen years are to be auctioned in June.

The letters to Fr Joseph Leonard, who was based in All Hallows in Dublin, provide a direct and at times intimate insight into the thoughts of the wife of JFK.

The correspondence with Fr Leonard began in 1950, when the then Jacqueline Bouvier was visiting Ireland with her brother, when she was she was 21 and Fr Leonard was 73.

The previously unpublished letters deal with her desire to return to the catholic faith, her marriage to JFK, his political ambition, his assassination and her consequent spiritual crisis following his death.

The hand written letters were given to the Irish Times before they go on sale at auction. Where Fr Leonard’s letters to Jacqueline Kennedy are remains unknown.

In 1952, Jacqueline Bouvier wrote about her desire to “be a good Catholic” and paid tribute to the Irish priest’s role in that.

She recalls, “I know it’s all because of you. I suppose I realized in the back of my mind you wanted that – you gave me the rosary as I left Ireland.”

Discussing her future husband to Fr Leonard, the young Jacqueline Bouvier acknowledged that Kennedy is “like my father in a way—loves the chase and is bored with the conquest—and once married needs proof he’s still attractive, so flirts with other women and resents you.”

In 1956, she wrote to the Vincentian priest after the birth of a stillborn daughter and said she could see so many good things that had come out of the tragedy; “how sadness shared brings married people closer together.”

Writing to the Dublin-based priest following the assassination of JFK, she wrote: “I am so bitter against God.”

She also wrote: “I think God must have taken Jack to show the world how lost we would be without him but that is a strange way of thinking to me.”

In the same letter, she warned that “God will have a bit of explaining to do to me if I ever see him.”

According to the Irish Times, Jackie Kennedy likened the correspondence and friendship to the celebrated early 20th century literary friendship between Franco-Romanian writer Princesse Bibesco and Parisian cleric l’abbé Mugnier which resulted in a book of their letters, ‘A Life of Friendship’.

Spokesman for Sheppard’s Irish Auction House, Philip Sheppard said the letters will be sold as a single archive lot which is likely to fetch between €800,000 and €1.2 million.