Let us foster a culture that protects life and respects women 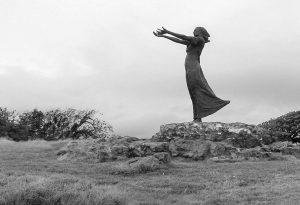 This statue, ‘Waiting by Shore’ by sculptor Niall Bruton at Rosses Point, is used as an image accompanying the Day for Life pastoral letter.

The pastoral letter for this year’s Day for Life,  entitled ‘Fostering a Culture that Protects Life and Respects Women’ has been published and this year is available in English, Irish and Polish.

In the letter the bishops note that there is currently a campaign to remove the constitutional protection of the life of the unborn child in the Republic, and that it is also the 50th anniversary of the 1967 Abortion Act, which made the deliberate killing of the child in the womb a lawful act.

In this environment, the Irish bishops say in their pastoral letter, “We are drawn to reflect, to pray and to offer practical and emotional support to those in need… We pray especially for those who have lost a child and for those who are concerned about their pregnancy.”

The letter draws on the different experience of three mothers, identified only as Caroline, Laura and Jenny.

“The joy of a couple at the prospect of becoming parents gives way to despair if the mother suﬀers a miscarriage or their baby is stillborn.  Caroline miscarried her sixth baby, Raphael, in the fourteenth week of pregnancy in 2013.  She and her husband asked their priest to conduct a funeral and a burial.  ‘Actually doing something to mark our loss was so healing.  It was a reminder that the baby was a real person.  Naming the baby was important too.  The way we see it, we have a child ahead of us in heaven praying for us’.

“Grief can also be associated with having an abortion.  Laura, who had an abortion at eight weeks, describes the moment, years later, when she acknowledged she had ended a life.  It happened when she saw a group of primary school children and realised that her baby would have been the same age.  Her next step was to go to Confession.  She says, ‘Understanding the truth of abortion is just the beginning. With absolution, the weight of shame and guilt is lifted forever’.”

Abortion is a grave sin, but the bishops note that Pope Francis has reminded priests that they are called to be ministers of God’s mercy and that he has said that the Church has not done enough to support pregnant women in desperate situations and who see abortion as a quick solution.

Seperately, the bishops’ letter tells the story of ‘Jenny’, who found herself pregnant, homeless and in debt. “She sought help and was given a room in a house run by a local pro-life charity, Life Housing, where she now lives with her son, Oliver,”  “The local Catholic parish provided baby clothes, toys and Christmas presents, and a local charity gave a pram and other equipment.  She received help to clear her debts and soon mother and baby will move into their ﬁrst home, a fully furnished two-bedroom house.  When Jenny was at her most vulnerable, discovering she was not alone saved her life, and Oliver’s.”

The bishops point to their own crisis pregnancy support organisation, Cura, which has services both for women, and for men, services during pregnancy, after a birth and also, after an abortion. Details about the services are available on www.cura.ie and help is available via the lo-call phone number 1850 622 626.

The Pastoral Letter concludes with two Day for Life prayers:

Prayer to Mary, Mother of the Life Within

Holy Mary, Mother of Love,
holding in your arms, the fruit of your womb,
graciously look upon our earth and remove from it
all that hardens our hearts and dims our eyes

to the preciousness of human life,
from the moment of conception to natural death.

Through the example of your tenderness
teach us the ways of compassion and love
that we may build up the civilisation of love among us
and a society that is truly worthy of the human person.

Help us to reject all that contributes to a culture of death,
and to work with others of goodwill
in promoting the culture of life.

Bring us ever closer to your Son,
so that we may know the fullness of life that he offers us
and come to know that life more perfectly,
with you, and all the angels and saints,
in the eternal life of Heaven.