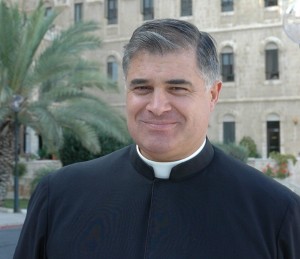 The Legionaries of Christ have apologised for a reflection in a promotional booklet comparing the order’s serial abuser founder to Mary Magdalene.

“I personally and profoundly apologise for my reflections in the booklet, ‘Magdala: God Really Loves Women’, published this summer by the Magdala Centre in Jerusalem, which is managed by the Legion of Christ,” Legionary Fr Juan Solana, director of the Magdala Centre, said in a statement on Thursday.

On Tuesday, the National Catholic Reporter reported that the booklet promoting the new $100 million centre included a reflection by Fr Solana on Fr Marcial Maciel Degollado who was dismissed from ministry in 2006 by the Vatican after it was discovered he had sexually abused seminarians and had fathered children.

Maciel was also a drug addict who courted the highest echelons in the church, where he was feted for his ability to bring vocations and money into the church. He was a personal favourite of St John Paul II.

Fr Solana compared the Legion founder to Mary Magdalene, the disciple of Jesus who was present at the cross where Jesus was crucified and the tomb after his resurrection.

“The priest speaks his heart,” Solana wrote in the booklet.

“Marcial Maciel’s initials are also MM, just like Mary Magdalene. She had a problematic past before her deliverance, so there’s a parallel. Our world has double standards when it comes to morals. Some people have a formal, public display and then the real life they live behind the scenes,” he said.

“But when we accuse someone else and we are quick to stone him, we must remember that we all have problems and defects. With modern communications so out of control, it is easy to kill someone’s reputation without even investigating about the truth. We should be quieter and less condemning.”

When Legionary Fr John Connor, North American territorial director, saw the passage in the NCR article, he reached out to Solana and expressed it was offensive to him and concern that others would share that view, according to Jim Fair, the territory’s communications director based in Chicago, who said Solana realised that and agreed to issue an apology.

In a statement included in a letter from Connor to fellow Legionaries and its consecrated and lay members, Solana stated: “The passages in question suggest a comparison between Mary Magdalene and Legion Founder Marcial Maciel, which clearly is inappropriate and poorly chosen.

“I was trying to make a point about compassion and forgiveness in light of the Legion’s history, but realise now that my words were awkward and suggest a reverence for our founder that we clearly reject. Again, I’m sorry for any hurt this has caused,” he said.

Solana added that the Legion will cease distributing the booklet containing the reflection in question.

Jim Fair, a member of the Legion’s lay wing Regnum Christi, told NCR he did not know if those booklets already distributed would be recalled, and that people in the territory had no prior knowledge of the booklet since it was a local project.

While he could not speak to whether Legionaries elsewhere shared the sentiment Solana expressed, Fair said the reaction to booklet “was pretty universal among all of us here, which was that it was an inappropriate statement and a really awful analogy.”

In his letter, Connor noted that “the past five years have been a time of challenge and change” for the Legion and Regnum Christi.

Despite an effort to undergo reform, he said the statement from Solana “must feel like a detour from our path forward. It is not. I want to assure you that we are, indeed, determined to stay on course.”