Learning to fail is important lesson for young  people

“Learn to be a raggy doll. You are screwed up, but so am I,” said psychotherapist and author Enda Murphy.

Mr Murphy was commenting on the findings of a report from the Children’s Rights Alliance to the UN entitled ‘Are we there yet?’ which stated that Ireland has the highest rate for young female suicide and the second highest for young men in the EU over the years 2009 to 2011.

It also ranks second of 194 countries for binge drinking of alcohol among those aged 15 and over.

“They’ve come out of a structured society in school. They’re going to college and suddenly all the bets are off and without any ability to cope with it, they are thrust into a huge world where the competing demands being made on them are phenomenal.”

Young people live in a world of instant gratification. “It is to mental health what instant fast food is to physical health – it destroys it,” he said.

Mr Murphy cited the STIR (Safeguarding Teenager Intimate Relationships) study from last year which showed that one in five girls were coerced into having sex.

“Many said the pressure to have sex was so great it almost became ‘normal’ and in most cases they didn’t even recognise it as rape.”

Mr Murphy, who with Dr Harry Barry, co-authored the book, ‘Flagging the Screenager’ said that in relation to suicide, society was looking at the wrong end.

“Rather than looking ‘downstream’ where we should be looking is [downstream] at what is knocking them all in.” 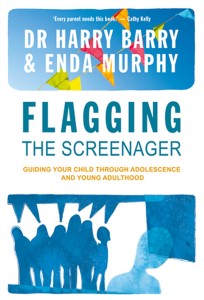 He was critical of a gentle approach to soft drugs like marijuana.

“They say ‘it is only weed’. It is hard to try to get youngsters to engage that they have an addiction to marijuana.”

Parents have a huge role and need to learn to listen to their children and spend time with them, he said.

Then involve and teach children the activities of living – simple things like filling the washing machine “otherwise we neutralise young people by not allowing them to do things.”

People often talk about ‘reaching out to young people’ but if a young person is suffering from low self esteem this tells them ‘You are somewhere where we are not’ reinforcing the idea that ‘you are a bit odd’.

“It is not reaching out to them but getting them to reach out to you and learn to be a raggedy doll and failure like the rest of us.”

John Tobin from the Aiséirí Addiction Treatment Centre told RTE that young people often came out of school with 500 points but without knowing how to live.

They needed to be taught in school how to live, he said.

“We don’t know the art of conversation, what it is like to sit down and talk to someone.”

Mr Tobin said that whereas some years ago those attending the Aiséirí addiction centres were aged from 40 to 50, “now we have 14, 15 and 16 year olds at the juvenile centre in Kilkenny”.

He said that 10 percent of compulsive gamblers died by suicide and that addicts who relapsed after treatment were at greatest risk of suicide.

Children were beginning to use drugs from as young as ten, starting with hash and moving on to cocaine. “Then it develops into a full blown addiction and they come to us.”