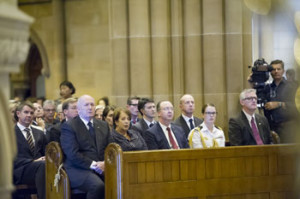 Mass at St Mary’s Cathedral for victims of Sydney Siege

Prayers have been offered by the Catholic Church for those who died, were injured and were held hostage during the Sydney siege.

“May the surviving hostages quickly heal and find new peace in their lives. We unite in prayer in support of families and friends who are today grieving the loss of loved ones,” stated Archbishop Denis Hart, the President of the Australian Catholic Bishops Conference.

In Sydney, Archbishop Anthony Fisher OP at St Mary’s Cathedral offered Mass for the victims of the siege and their families, the survivors, police and emergency workers, as well as civic and political leaders.

“I invite continuing prayer for peace, healing and generosity to our neighbours after this tragic event, in solidarity with people of all faiths in our blessed city of Sydney and country of Australia,” he said.

Present at Mass were the Governor General of Australia, Sir Peter Cosgrove and Lady Cosgrove; NSW Premier Mike Baird, his Deputy Troy Grant and other State Ministers along with Federal Communications Minister Malcolm Turnbull and Mrs Lucy Turnbull and other civic leaders.

City workers, many from the legal profession, came to the Cathedral to pray, pay their respects or seek comfort.

Many were extremely upset by the terrible events in which more than 20 people were held hostage for 16 hours in a cafe before two hostages and the gunman were killed. Seventeen hostages were left traumatised and some were injured but alive.

Meanwhile, Dublin priest Fr Brendan Purcell who is based in Sydney told CNS that he was struck by how people turned to prayer when the news of the siege began to unfold.

The former UCD lecturer in philosophy is based at St Mary’s Cathedral.

“No one knew what was going on, and there were threats of bombs around the central business district. The cathedral and the cathedral school were put in lock-down,” he told CNS.

He said the tragedy had brought Australians together in solidarity.

In his homily, Archbishop Fisher said “We are not used to hearing words like ‘siege’, ‘terrorist’, ‘hostages’ and ‘security forces’ associated with our city.”

The café is only two blocks from St Mary’s Cathedral, and one block away from the Supreme Court, even closer to the New South Wales Parliament, the Reserve Bank and the Channel 7 studio.

“We went to bed hoping to wake to good news. But despite patient efforts to maintain calm and negotiate there were, in the early hours of this morning, flashes of gunfire, intervention by our police to save lives, merciful escapes, but finally death. Hell had touched us,” said the Archbishop.

He added that people will have to wait for history to tell how much 16 December 2014 will affect Australians, but for now “the heart of our city is broken” by the deaths of two innocent hostages along with the gunman.

He described one of the deceased, Katrina Dawson, as a mother of three young children and gifted barrister. The other, Tori Johnson, was the young manager of the café. The third was Sheik Man Haron Monis the gunman.

“Much is still unclear about him, his motivations and affiliations, and we must avoid too quickly jumping to conclusions and pointing fingers,” said the Archbishop.

He urged people not to become cautious, cynical, suspicious of neighbours, or worse turn on them and undermine what is most loved about the Australian way of life.

He spoke of  the spontaneous tributes appearing in Martin Place and on the internet; leaders of all religious, political and ethnic backgrounds calling for calm, for prayer and for support for each other. 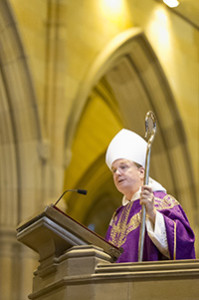 The Grand Mufti of Australia, Professor Ibrahim Abu Mohamed, said he and the Muslim community was devastated by the incident.

The President of the Lebanese Muslim Association, Samier Dandan said Australian Muslim leaders also offered the help of their communities.

Ordinary Australians have turned to social media to spread tolerance and solidarity.

Using the #illridewithyou hashtag address on Twitter they offer to travel with members of the Muslim community who feel intimidated or are too scared to travel wearing Muslim dress in public during and following the seige.

The action is unusual on two fronts – the fact that ordinary people are aware but also are prepared to do something about the Islamophobia that ordinary Muslims face in the current climate.

Earlier this month, at the end of his trip to Turkey Pope Francis condemned “Islamophobia” while at the same time calling on intellectuals, politicians and religious leaders to denounce all fundamentalist terrorism.