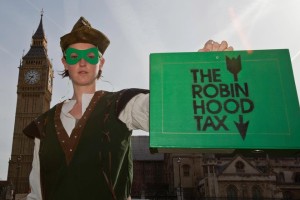 Over 40 leading charities and civil society organisations have so far joined the ‘Claiming Our Future’ campaign calling for the introduction of a Financial Transaction Tax in Ireland.

The tax on banks and financial institutions would take a fraction of a percent off each financial transaction and this money would go towards fighting poverty at home and abroad.

The Jesuit Centre for Faith and Justice, Trócaire and Social Justice Ireland are just some of the charities calling for what has become known as the ‘Robin Hood Tax’ (Financial Transaction Tax or FTT) and which has been backed by Oxfam and Christian Aid in the UK for many years.

“An FTT will help fulfill the vision of a world free of poverty,” stated Éamonn Meehan of Trócaire, while Jerry MacEvilly, who also works for Trócaire said, “An FTT is a way for developed countries to fund actions to tackle climate change.” 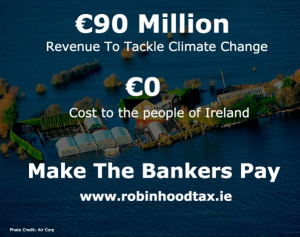 In December 2015 at an Ecofin meeting (EU Finance ministers) the Irish Government did not join some 10 EU countries which signed up to introduce the FTT.

“We simply cannot understand how the Irish Government can stand by the banks and not by the people. Especially now that our European neighbours are implementing Robin Hood tax,” stated the campaign organisers.

They suggest the estimated potential €320+ million raised every year in Ireland could help address the housing crisis or child poverty, or on a more global level help fight the effects of climate change.

Organisers have vowed to lobby Irish political parties ahead of elections to urge them to introduce the Robin Hood Tax.

The official launch of the campaign will take place on Tuesday 26 January 2016 and it will include a presentation of the newly published *NERI Research paper titled ‘Estimating the Revenue Yield from a Financial Transactions Tax for Ireland’ by Micheál Collins. 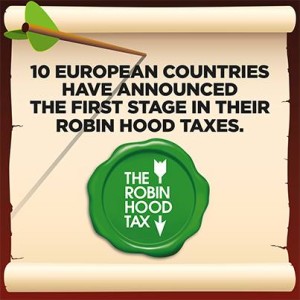 There will also be an update of European developments on an FTT by David Hillman.

At the time of the European Finance Ministers meeting, David Hillman, spokesperson for the Robin Hood Tax campaign in the UK said, “Participating countries have today taken an important step towards a popular and proven tax that will raise billions from the financial sector – that is something the public can celebrate.”

Oxfam was not as upbeat in its assessment and stated that the 10 finance ministers announced an agreement “on aspects of” a European Financial Transactions Tax, but that there was still no progress on “decisive elements”.

Oxfam’s EU policy advisor on the Financial Transaction Tax, Javier Pereira said, “EU member states have missed the opportunity to agree on the design of an EU FTT and use it to broker a better climate deal for the whole world.”

The 10 EU countries agreed enhanced co-operation for the tax rather than a full agreement with all member states involved.

The proposed Robin Hood tax on the financial sector would involve about 0.01% on transactions on stocks, bonds, foreign currency and derivatives.

In Ireland, ‘Claiming our Future’ is facilitating the campaign for the Robin Hood Tax.

This national non-party-political civil society network was established in 2010 with the aim of furthering the values of equality, environmental sustainability, participation, accountability and solidarity.