Home > News > Catholic schools are the most socially inclusive

Catholic schools are the most socially inclusive 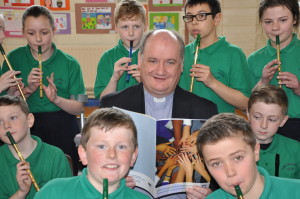 Fr Michael Drumm with students from Scoil Aine Naofa at the launch of the CSP inclusion document – ‘Catholic Primary Schools in a Changing Ireland: Sharing Good Practice on the Inclusion of all Pupils’. Pic: Brenda Drumm.

New guidelines which will assist Catholic primary schools in their inclusion of non-Catholic pupils were launched by the Catholic Schools Partnership on Thursday.

Catholic Primary Schools in a Changing Ireland: Sharing Good Practice on the Inclusion of all Pupils draws on the new curriculum in Religious Education which will be introduced from September 2015.

The document has been drawn up in response to the report of the Forum on Patronage and Pluralism which was published three years ago.

It gives many suggestions on how to celebrate the diversity of faiths within the school community and describes a holistic approach to Religious Education which is open to all children.

It also offers ideas on inter-cultural dialogue in a Catholic school context.

Copies of the document have been sent to the country’s 3,000 Catholic schools.

Speaking at Scoil Áine Naofa Senior NS in Lucan in Dublin, Fr Michael Drumm, Chairperson of the Catholic Schools Partnership said, “Catholic schools have adapted to demographic change with significant net migration into Ireland and many of them have led the way in integrating migrants into local communities.”

“They have been leaders in areas such as social inclusion, special needs and Traveller education.”

Fr Drumm added that the Chief Inspector’s Report 2010-12 made clear that almost all parents and pupils described their schools as cultivating an inclusive, child-centred ethos.

“The CSP has consulted widely in the preparation for today’s document. Given the notable record of Catholic schools in the area of social inclusion, Catholic Primary Schools in a Changing Ireland: Sharing Good Practice on the Inclusion of all Pupils aims to help schools in developing good practice with regard to religious issues.”

However, he said that as the Department of Education and Skills had noted, there is no ‘one-size-that-fits-all’ in this regard. 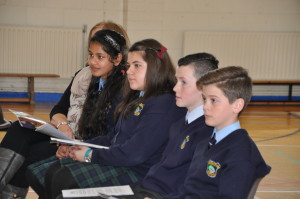 “Rather schools need to develop policies and practices which address the context of each particular school,” he underlined.

According to Fr Drumm, what emerges from research is that “Catholic schools are amongst the most socially inclusive of all schools”.

He said the document sought to also emphasise religious inclusion.

The new religious education curriculum which will be rolled out from September 2015 and will replace Alive-O has a “very strong element of inter religious and inter cultural dialogue”, the CSP chairman said.

Asked about the research finding that most multi-denominational schools did not have any Traveller pupils, while Catholic schools were more likely to have greater numbers of Traveller pupils compared to minority faith schools, Fr Drumm told CatholicIreland.net that “All the evidence demonstrates that the vast majority of Traveller children are attending catholic schools and are integrated within those schools.”

“There has been a long tradition of educating Travellers’ children in catholic schools and we hope that continues into the future.”

“The most socially inclusive schools in terms of Traveller education, migrants into the country and special needs education, the leaders in all of those areas have been catholic schools. There is no doubt about that and even the report we quote is – the ESRI report – clearly demonstrates that.”

Scoil Áine Naofa Senior NS shares a campus with St Thomas’ NS. There is an overall school population of almost 1,100 pupils. Students from 49 different nationalities/ethnic backgrounds attend Scoil Áine and there are 36 languages spoken in the homes of the children.

Some 89% of primary schools in Ireland operate under Catholic patronage.

Asked about parents who have little choice but to send their child to a Catholic school and their desire to opt out of religious education, Fr Drumm told CatholicIreland.net that the document makes it clear that no one would ever be forced to take part in religious education.

“Having an opt out from religious education is a right that parents have,” he said.

Fr Drumm added that the number of parents who request that in schools like Scoil Áine is very few.

“In fact in a lot of cases it never happens. We would like schools, while respecting the constitutional rights of everybody and the human rights of every body, to invite parents to understand the RE programme and then to opt into it – even if they come from a different religious background. The programme itself has a certain capacity within it that is useful in the formation of all children, even children of no faith.”

Four students from different religious and cultural backgrounds spoke to CatholicIreland.net about their schooling at Scoil Áine Naofa.

Saryu Mada, Amy Savin, Craig Maher and Victor Mamaliga are all in sixth class. Though Saryu Mada is Hindu, she sang the responsorial psalm at her classmates’ confirmation. Even though she herself wasn’t being confirmed, she joined her friends in their celebration afterwards.

Craig Maher is Catholic and he said it was good to learn about different faiths and cultures as it made him more interested in his own faith.

“Just because we are different religions it doesn’t mean that we treat each other any differently,” Saryu Mada said. “They respect my religion and I respect them back,” she explained.

Victor Mamaliga, whose parents are from Moldova and is Russian Orthodox, said that during confirmation preparation he never felt left out. “We learnt about the fruits of the Spirit and what the differences between how our religions are.”

They are all working together for a forthcoming cake sale which will raise money for either the Jack & Jill Foundation or Barretstown.