"The Pope is showing tremendous global leadership in the area of biodiversity" - Dr Liam Lysaght from the National Biodiversity Data Centre. 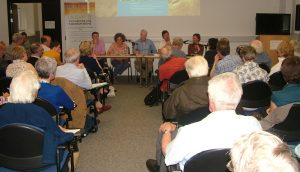 Marking the first anniversary of Pope Francis’ landmark encyclical, Laudato Si, on Wednesday night (8 June), the Jesuit Centre for Faith and Justice and Trócaire, jointly hosted a seminar on Caring for our Common Home.

“The Pope is showing tremendous global leadership in terms of biodiversity,” he told a packed audience at the Loyola Institute in Trinity, Dublin.

Dr Lysaght recalled that years ago his own father used to walk two miles home along a road of North Kerry chatting to his friends.

“He could not hear what they were saying because he was deafened by the corncrakes. It disturbs me that I am living in a countryside that is not deafened by corncrakes,” said Dr Lysaght.

As a child he scooped pebbles and moss from the Shannon. “It would be alive with eel fry”.  A few years ago, he did the same thing and there were no eel fry. “It saddens me that my own children won’t see that.”

Biodiversity loss is often thought of in terms of white elephants, but there is loss in Ireland too, he said, citing examples like the extinct great oak, six species of moluscs (snails), one species of butterfly and six species of moss which have become extinct in last 100 to 150 years.

Corn bunting – extinct in Ireland since 2000

The Corn Bunting, a bird the size of a Skylark was declared extinct in the year 2000.

“That is really alarming, that we have allowed a creature like that to go extinct. It is a shocking indictment.”

The encyclical makes the point that that is the tip of the iceberg, continued Dr Lysaght.

The microorganisms are more important – fungae, algae which cause a living ecosystem for us to benefit from.

There are 31,000 species described for Ireland, he explained, but at least another 10,000 species have yet to be described.

“We are not documenting what is happening, don’t mind understanding it. There is all this life happening around us and we don’t understand the consequences of our actions.”

“It is a real crisis that is happening and we have the evidence base to show it.” 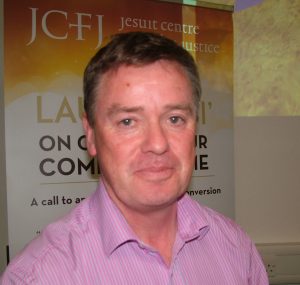 “What you find in the bogs of Connemara you will find nowhere else in the world.”

“Somewhat in the region of 95% of Ireland’s active raised bogs are gone. In the natural habitat, these [bogs] are as important as Newgrange is to our cultural heritage.”

He criticised the few thousand people cutting the bog “for the sake of a couple of hundred euros a year”.

“I reckon they are making a small [financial] return for what is an absolute jewel in the crown.”

While there was a proliferation of reports (technocratic conservation), Dr Lysaght was concerned over the apparent disconnect with people which resulted in them not understanding why conservation is important.

Natural heritage has got a bad press largely because of the way the EU habitats directives have been implemented.

Up until very recently we had no national legislation for designated sites of national importance and no one seemed to care, he added.