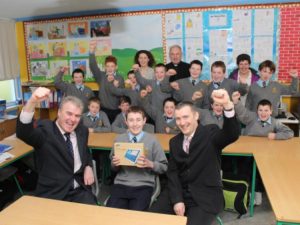 Tributes have been paid in Co Limerick to the last Christian Brother to be principal of a primary school in Ireland who retired last week.

It means there are no Christian Brothers teaching in Co Limerick anymore or as principal of a primary school in the whole country.

It is the first time since the Christian Brothers came to Doon 142 years ago in 1874 that a lay person is principal.

Br Dormer, who has taught in Doon since 1993, is replaced by Joanne O’Connell as principal.

Speaking to the Limerick Leader newspaper, Br Dormer said “When I announced my retirement some people were surprised, but having passed my 65th birthday, there was no choice in the matter, life moves on.”

Br Dormer, who started teaching at just 19, added “I hope I have made a positive difference in some people’s lives. It is a wonderful profession as you are moulding the youth of future generations.”

The retirement of Br Dormer is the second major change in the Christian Brothers in Doon over the last number of years.

In 2014, St Fintan’s CBS in Doon was amalgamated with St Joseph’s and St Michael’s schools in the area to form Scoil na Trionoide Naofa.

Speaking at the sod turning of the newly amalgamated school Anne Kelleher, chief executive of CEIST (Catholic Education and Irish Schools Trust), said that despite the amalgamating of the CBS secondary school with three other schools the new school would have a strong faith based ethos.

She added, “The school will supplement and enhance excellent teaching and learning in St Fintan’s, St Joseph’s and St Michael’s. It will have a faith based ethos. It was a great privilege to turn the sod because there is a rich heritage of education in Doon going back over a century.”