Jean Vanier, the founder of L’Arche, has won the 2015 Templeton Prize.

In remarks prepared for the announcement of the prize, the 86-year-old made a plea for global peace.

“Before being Christians or Jews or Muslims, before being Americans or Russians or Africans, before being generals or priests, rabbis or imams, before having visible or invisible disabilities, we are all human beings with hearts capable of loving,” he stated.

It all began in 1964 with a simple act of kindness by him when he took into his home two intellectually disabled men.

That has now grown into 147 L’Arche residential communities operating in 35 countries, and more than 1,500 Faith and Light support groups in 82 countries that similarly urge solidarity among people with and without disabilities. 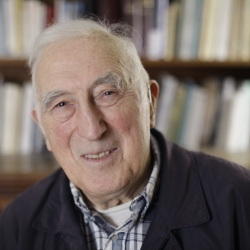 Accepting the prize on behalf of L’Arche, Jean Vanier stated: “Our society will really become human as we discover that the strong need the weak, just as the weak need the strong. We are all together working for the common good.”

He added: “My dream for this magnificent prize you have given me, and through me to L’Arche and Faith & Light, is for us to create spaces and opportunities for meetings which transform hearts. Places where those caught up in the world of success and normality, and those who are in need, but who are also teachers of love and of simplicity, come together.”

He stated that these in these places people can share, eat, laugh, celebrate, weep and pray together, and “the hearts of those who carry power in our society can be melted and rest; and where all together we may become a sign of peace.”

Jean Vanier’s message of belonging and social justice has helped to nurture dialogue and unity among Christians, Hindus, Jews, Muslims and other faiths through lectures, conferences and retreats around the world. He has written more than 30 books translated into 29 languages.

He continues to live on the grounds of the original L’Arche community in Trosly-Breuil, north of Paris, and will be formally awarded the Templeton Prize at a public ceremony at the church of St Martin-in-the-Fields in London on 18 May.

The Templeton Prize is valued at £1.1 million (about €1.5 million) and is awarded annually to an individual who has made exceptional contributions to life’s spiritual dimension, whether through insight, discovery, or practical works.

The announcement was made at a news conference yesterday (Wednesday) at the British Academy in London by the John Templeton Foundation, based in Pennsylvania.

The prize is a cornerstone of the Foundation’s international efforts to encourage and highlight discoveries relating to human purpose.

Vanier’s five decades of living with vulnerable people has given him an understanding of weakness and common humanity.

This wisdom helps answer the ‘Big Questions’ and continue the legacy of founder Sir John Templeton, the late global investor and philanthropist, in encouraging and recognising spiritual progress.

Jennifer Simpson, the daughter of Foundation president and chairman Dr John M. Templeton Jr and granddaughter of Sir John Templeton, said that Jean Vanier brought a much-needed perspective to how the power of love can advance spiritual progress in the world.

“By recognising the importance of every individual, regardless of their station in life, Jean Vanier underscores how each of us has the ability not only to lift up others, but also ourselves,” she said.

“His powerful message and practice of love has the potential to change the world for the better, just as it has already changed the lives of countless individuals who have been touched by this extraordinary man.”

Last year’s recipient was Czech priest and philosopher Tomáš Halík. Rev Desmond Tutu, the former Anglican archbishop of Cape Town, South Africa, received it in 2013 and the 2012 Templeton Laureate was the Dalai Lama.