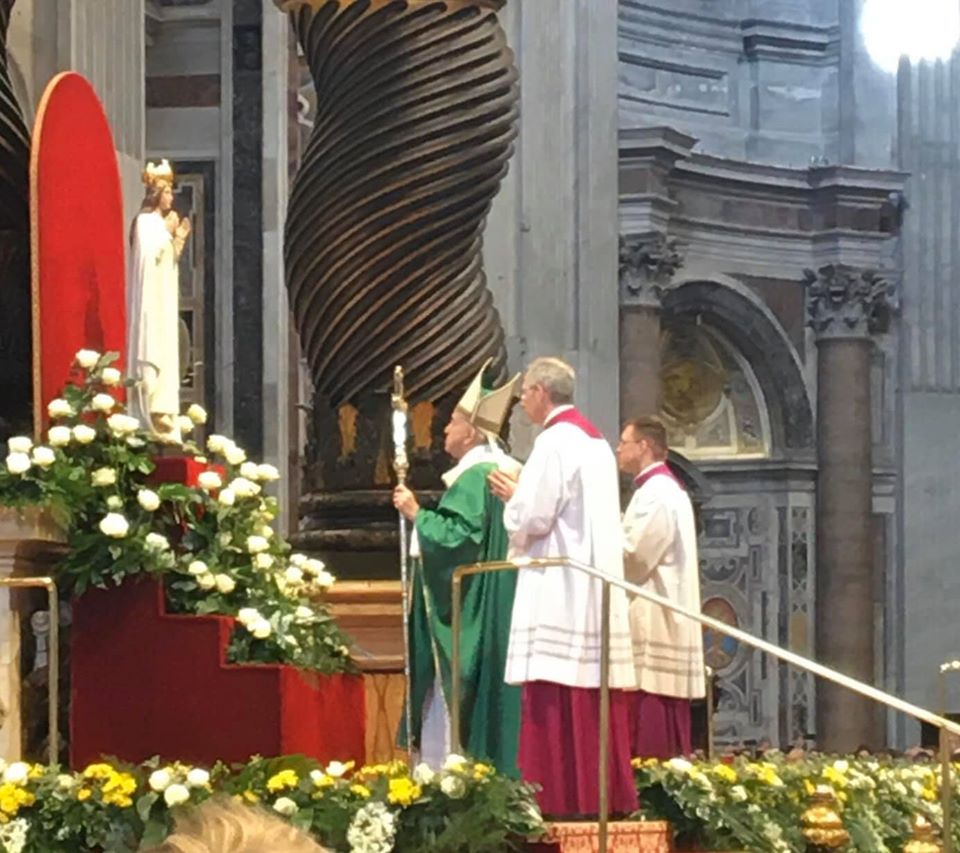 Pope Francis prays at Pilgrim Statue of Our Lady of Knock

The ladies of the Schola Cantorum Basilicae choir from Knock Shrine and their leader Úna Nolan have performed for the first time the iconic hymn “Lady of Knock” in St Peter’s Basilica, Rome. Also present on the altar for the Papal Mass on Sunday was the new Pilgrim Statue of Our Lady of Knock, with Pope Francis pausing for a quiet moment of prayer and to bless the statue.

More than 150 parishioners from Knock and the surrounding area went to Rome for what was a historic moment for the National Marian Shrine. They, Archbishop Michael Neary of Tuam, and Fr Richard Gibbons, PP and Rector of Knock Shrine had been invited to mark the special Word of God Mass on 26 January.

“I am delighted that Knock Shrine is being honoured at such an important Mass in Saint Peter’s Basilica. It points to the richness of the Apparition, which amongst other aspects, has the Word of God as a central part of its message,” said Fr Richard Gibbons.

He added that all of those who went to Rome for the Mass were “deeply conscious of the significance of this event” and “thankful for the opportunity to take part”.

Also present and concelebrating during the Mass was a large group of priests from the Irish College in Rome, Bishop Duignan of Clonfert, and Fr Paul Bennett, CC, Knock Shrine. Shane Costello, Tuam Archdiocese, who is preparing for ordination later this year, led the entrance procession at the Papal Mass, at which green vestments were worn.

After the Mass, those present were given a copy of the Bible in a symbolic gesture of encouragement to make room each day in their lives for the Word of God.

In his letter Aperuit Illis Pope Francis stated that the Third Sunday of Ordinary Time was to be dedicated to the celebration, study and spreading of the Word of God. Pope Francis said that people need God’s Word so that they can hear, amid the thousands of other words in their daily lives, the one word that speaks to everyone not about things, but about life. 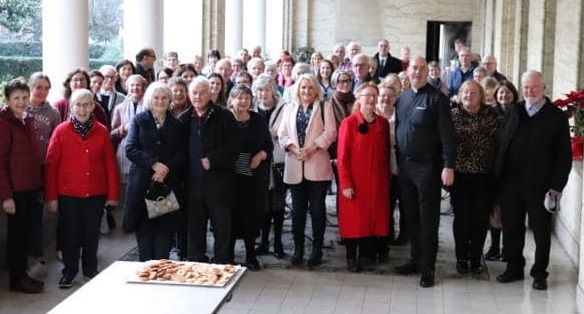 The group from Knock visiting the Irish College, Rome.

Pope Francis visited Knock Shrine as part of his time in Ireland for the World Meeting of Families 2018. In August 2019 Archbishop Rino Fisichella, President of the Pontifical Council for the Promotion of the New Evangelisation, preached at the National Novena in Knock. In his reflection on the Apparition at Knock, he highlighted the importance of Saint John the Evangelist, who held the book of Scripture in his hand during the Apparition at Knock. Following on from Archbishop Fisichella’s visit, an invitation was extended for Knock Shrine to participate in a significant way in the first Mass honouring the Word of God in Rome.

The Irish choir performed sacred music including the much-loved “Lady of Knock”, which was written by Eurovision Song Contest winner Dana and her brother Damien Scallon and was first released as a single in 1981.

The new processional statue of Our Lady of Knock was commissioned to celebrate the 140th anniversary of the Apparition at Knock in 1879 and was blessed by Pope Francis before it left Rome for Knock in August 2019.

The last time that Knock Shrine was officially involved in a Vatican ceremony was 1954, when the Knock Shrine Society led by Archbishop Joseph Walsh presented the Shrine banner to His Holiness Pope Pius XII.