Home > News > Lack of vocations a concern for bishop-elect

Lack of vocations a concern for bishop-elect 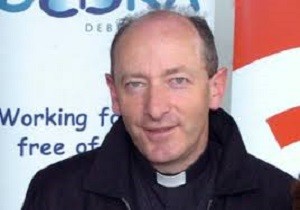 The new Bishop of Waterford & Lismore has admitted that the lack of new vocations across the country is “a worry’” for every bishop.

Clare native Fr Alphonsus Cullinan will formally be ordained as Bishop of the Diocese of Waterford & Lismore at a special ceremony in the Cathedral of the Most Holy Trinity in Waterford City this Sunday.

Speaking at a briefing for members of the media, Fr Cullinan told CatholicIreland.net that it will be a big change for him to take over the running of a diocese of some 155,000 people across Co Waterford as well as parts of Counties Tipperary and Cork – coming from managing a parish of some 4,000 people in Rathkeale in Co Limerick.

“This is new territory for me. It’s going to mean a lot more work,” he said.

Bishop-elect Cullinan cited one of his heroes as the late Donal Walsh from Kerry, the teenager who captured the nation’s hearts before his death from cancer in 2013 and who often spoke of his strong faith.

“Donal would say forget about the difficulties, get out there and do it,” Fr Cullinan recalled.

He said he is looking forward as bishop to meeting as many local people as possible, including young people, as well as consulting with all of the priests of the diocese regarding the future of Waterford and Lismore and the future of the Church.

“I’m going to try my best. The welcome has been really beautiful, everyone has been so positive and so welcoming, right across the board.”

He said his first priority is to “pray” and to “be a real, committed Christian. I do believe this is God’s will for me. When the Papal Nuncio asked me I said ‘yes’ because that is the way God’s call works.”

Asked if the decline in the number of serving priests and the decline in new vocations to the priesthood is a concern he said, “Of course. That is a worry for every bishop. Right across the country it is true we are in that time of the church in Ireland now where vocations are down.”

He pointed out, however, that there have been other times in the Church’s history when vocations have gone “up and down” and said that, in other parts of the world vocations are burgeoning and attendances are growing.

Bishop-elect Cullinan added, “It’s always a struggle for the church, it’s never plain sailing. Right now one of the struggles in Ireland is looking for vocations. But I believe the Lord is still calling and people are still being called. Maybe they just can’t hear right now, the call of the Lord.”

Bishop Cullinan’s motto will be Deus Atque Audacia, “God and Daring” and he said that encouraging young people to become more involved in the Church is a goal.

“I’d love to meet young people and see where they’re at. When I was in Limerick IT, that was part and parcel of my work.”

The Episcopal Ordination of Fr Alphonsus Cullinan as Bishop of Waterford and Lismore will take place on Sunday next 12 April at 3pm in Waterford Cathedral.

The chief ordaining prelate will be the retiring Bishop of Waterford and Lismore Bishop William Lee, who will be assisted by the Archbishop of Cashel & Emly, Dr Kieran O’ Reilly, the Primate of All Ireland, Dr Eamon Martin, the Archbishop of Dublin, Dr Diarmuid Martin and the Papal Nuncio, Archbishop Charles Browne.

The Apostolic Mandate from Pope Francis will be read by Mgr Nicholas O’Mahoney, Administrator of the diocese while the sermon for the ordination will be preached by Mgr Michael Olden.