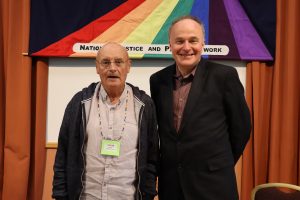 British MP John Grogan, who represents the constituency of Keighley and Ilkley in Yorkshire, has said Britain needs to look at its prison system and ask itself why it jails far more people than virtually every other European country.

The politician, who is a member of the Catholic Legislators Network in the Houses of Parliament and whose brother is a priest of the Diocese of Leeds, told the National Justice and Peace Network’s annual conference in Derbyshire at the weekend that the prison crisis was a question of committing resources.

“But it is also a question of not jailing people who don’t need to be jailed and who would be better doing community service,” he stressed.

He called for insurance concessions for employers who employ people directly out of jail, a proposal the new minister for justice in Britain has suggested and which he supports as “a good thing”.

Mr Grogan, whose grandparents emigrated from Ireland and settled in Bradford, paid tribute to the Society of St Vincent de Paul’s work in his constituency in helping the most marginalised.

He singled out benefit sanctions as a key area for advocacy work and he praised his local SVP for supporting disabled and vulnerable people suffering because of the cutting or withholding of benefits.

Warning that there was “a legal aid desert”, he highlighted how the SVP in Keighley and Ilkley are very active in going to tribunals and accompanying those who are “marginalised or derided in our society” and helping them access legal aid.

Addressing over 200 delegates who attended the conference on behalf of diocesan justice and peace groups in England and Wales as well as groups like CAFOD, JRS, Pax Christi and the Columban missionaries, John Grogan offered ten observations, some from a Catholic standpoint and some from the standpoint of his political beliefs, on an inclusive Britain.

Describing it as an “exciting time in the Church” because of Pope Francis, he said “obviously there is lots of misery and lots of injustice, but I’ve always been a Catholic who thinks we should emphasise the joy. I hope that the changes that are happening in the Church will continue – I pray for a long life for the Pope.”

Though elected in 2017 as Labour MP for Keighley and Ilkley, John Grogan previously had been an MP for Selby before boundary changes abolished the seat.

He said one of the changes he had noticed between 2010 and 2017 was the input now from Catholic organisations.

“There is now a regular group of MPs – we have a Mass every Wednesday in the chapel. The various organisations like CAFOD and Justice and Peace give us briefings. We have had the Cardinal come in and give speeches before Mass.”

In his address, he argued that justice is often not as high up the political agenda as it should be.

Another area he highlighted was the issue of social care in society and the need to fund end of life care.

“We have a society now where some people are lucky to own their own house but it is a lottery as to whether they will have social care at the end of life. If ever there was a case for a collective solution, I think this is it.”

He floated the idea that those who are lucky to own their own houses would pay a levy of 10 to 15 per cent on the house. That way they would be certain of keeping most of their inheritance, but they would give that 10 to 15 per cent to the state so that everyone got free care in their latter years. “We have to do something,” he appealed.

He also called for more resources to properly reward those who work in social care.

On the issue of the gap in incomes in Britain, the Labour MP said these gaps were now “indefensible”.

“We are a more divided society than many other European nations,” he stated and added that hopefully Britain at some stage would move to a living wage as well.

John Grogan is committed to issues of social justice and peace, and he voted against Trident renewal. He appealed to his audience of around 200 justice and peace activists on Sunday to stay engaged with poverty issues and to not “give up on democracy”.

The 40th conference of the National Justice and Peace Network (NJPN) in Derbyshire took the theme, ‘In the shelter of each other the people live’, and explored building a Church and a society with the marginalised, the excluded and the most vulnerable at its heart.

John Grogan’s session was chaired by Fr Colum Kelly of Apostleship of the Sea, who ministers to seafarers at the port of Immingham and officiated at the conference Mass.

He lives at the docks and feels that, “if we are to minister to those in need we need to go to where the hurt is”.

Many seafarers are away from home for 9 or 12 months at a time.

“A lot of what we do for the seafarers are small gestures – by coming onto the ship or giving them some phone cards, Sim cards, or something that can give them Wi-Fi access,” Fr Colum said.

He expressed the hope that the Church would fully embrace the inspiration of Pope Francis and his call for the Church to be a “field hospital”, outgoing and responsive to the needy.