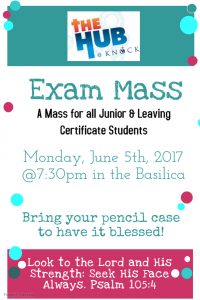 A special mass at Knock for exam students, and the blessing of their pencil cases, has raised a few eyebrows, and many Facebook Likes and Shares. While the blessing of the pencil case is symbolic, the young students who are about to sit their exams do appreciate the special Mass which is fast becoming an annual fixture at the Basilica in the National Shrine at Knock.

“It is aimed at giving the students a sense of hope and encouragement but also a sense of calm and control over their exam process … and to remind them of the idea that God is with them,” said Andrea Lynch, a youth minister at Knock.

Andrea is a religious education teacher originally from St Louis, Missouri, living in Ireland for the last five years to study for her PhD in special education and working in Knock for the summer.

“So many of them think that exams are the be-all and end-all of life, and [the Mass is] to try to put perspective on life,” she said.

Before she arrived in Ireland, she had never seen an exam Mass let alone a pencil case blessing. She said that “[last year] there were 80 to 100 young people around the altar for the blessing of the pencil cases, so it was a neat thing.”

She added: “It also shows a sense of solidarity, to remember you are not the only one going through this, it is a rite of passage, there are other people just like you facing the same thing.”

The Mass is attended by young people and their families from Knock and other parishes in Mayo and nearby counties such as Sligo, Galway and Roscommon. Often members of the community, aunts, uncles and grandparents attend and pray on behalf of their young neighbours and relatives.

Fr Richard Gibbons, PP and Rector of Knock Shrine, is the celebrant, and Una Nolan is involved in the music for the Mass.

Students from nearby parishes and schools have already volunteered to help with the readings, prayers and presentation of the gifts. All the readings are specially chosen. The gifts will include an atlas, calculator and history book.

Students will be able to take home the Mass leaflet so they have the prayers and readings to hand during the exams. They will also receive a keepsake with a quote from scripture. 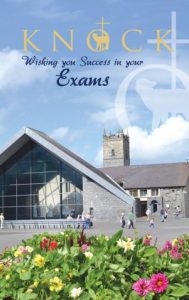 The exam Mass is being held in early June and is just one of a whole programme of events for young people to be held at Knock over the summer.

The Volunteer at Knock Shrine (VAK) is continuing this year, enabling young teens from the age of 16 to 18 to train in communications, manual handling, sign language and other areas and then use their new skills while volunteering on weekends when there are pilgrims in Knock.

During the first week in July, Knock Youth Ministry (KYM) will be open for children aged 7 to 11 with arts and crafts, sports, prayer, dance, music and much more that will help get them thinking about God.

There is also a kids club – The Ark – for children of 5 years and older. Then there is the HUB (Hear Understand Believe) for older children and young teens to drop in and meet other like-minded teens.

During the Annual Novena in August, there will also be special programmes for children and young people.