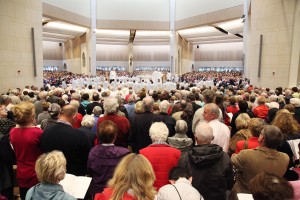 The overhaul and redesign of the interior of Knock Basilica has been awarded the Interior Architectural Project of the Year 2016  in the Irish Design and Build Awards.

The extensive and elegant overhaul which was designed by A&D Wejchert and executed by Paul Stewart, included a full internal fit-out, some structural adjustment, a new sacristy and sacramental chapel, installation of new restrooms and the redesign on the entrance lobby and forecourt.

The Basilica is now more comfortable and welcoming for the significant numbers visiting the shrine every year.

The original Basilica was completed in 1976 with little enhancement work in the intervening period.

The refurbishment has seen the Basilica’s successful transformation into a warm, meditative space to the benefit of both celebrant and congregation.

The works on this religious landmark, were crucial to the building and to enhancing the visitors experience not only to the building but to the area of Knock itself where the Basilica enhances the locality and supports regional tourism.

The improvements were welcomed by locals and visitors alike. Paul Stewart expressed the company’s appreciation at receiving such recognition for this project.

“It was a magnificent project to be involved in and it easy to appreciate the success of its design and architectural merit. A&D Wejchert, Stewart and all involved are proud of our involvement in its’ delivery for Knock Shrine.”

Responding to the news, Fr Richard Gibbons said, “After months of planning and preparation, to the actual physical work being carried out to the final artistic elements, the Basilica refurbishment has been a long and inspirational journey for us.”

“It is phenomenal to be able to step back and see all involved gaining such great recognition for their talent and accomplishments. We are very happy to share in this proud moment with them.”

Meanwhile, Knock Shrine is preparing for the first performance ever by RTÉ Concert Orchestra, together with Cór Mhaigh Eo, in the beautifully refurbished Basilica.

The Peace Concert is to commemorate the 1916 Rising and World War I.

The concert is being staged by the Mayo International Choral Festival.

Mezzo soprano Anne Marie Gibbons and tenor Owen Gilhooly, who have performed in many prestigious operatic venues around the world, will front the concert while members of the Ballina Chamber Choir, Cór Mhaigh Eo and Dún Laoghaire Choral Society will form a 120-strong choir.

Acclaimed Hollywood composer Patrick Cassidy, and one of Ireland’s leading conductors today, David Brophy, are also part of the project.

The concert will feature excerpts from the international choral sensation – ‘The Armed Man: A Mass for Peace’, by the Welsh composer, Sir Karl Jenkins.

The powerful and inspiring choral piece was composed to mark the millennium in 2000 and has since been performed over 1,000 times in more than 20 different countries with over 15 gold and platinum awards.

In addition, the orchestra will perform a special piece composed by Patrick Cassidy for the 1916 commemoration.

Mr Cassidy is a hugely successful composer who is originally from Co Mayo but is now based in LA.

He is a recent recipient of the ‘Creative Talent Award 2015’ at the Richard Harris International Film Festival and has worked on the musical scores of major Hollywood movies, such as Hannibal, Veronica Guerin, Kingdom of Heaven and Calvary.

The concert will be produced in association with the Western Development Commission and Knock Basilica.

Tickets for A Concert for Peace at Knock Basilica are on sale now.