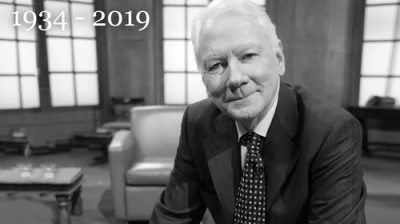 At the funeral Mass for the late Gay Byrne on Friday, the principal celebrant, Fr Leonard Maloney SJ said those who knew the broadcaster well knew him as “a man of faith”.

In his homily at St Mary’s Pro Cathedral in Dublin, the Jesuit provincial said Byrne’s faith was not the kind of faith that has all the answers. “It was the kind that asks all the questions”.

The much-loved host of the Late Late Show and RTE radio presenter died on Monday after a long battle with cancer. He was 85.

He is survived by his wife Kathleen and his daughters Suzy and Crona as well as sons-in-law, Philip and Ronan, grandchildren, Cian, Sadhbh, Kate, Saoirse and Harry, as well as his sister Mary.

President Michael D. Higgins and his wife Sabina led mourners from the world of media and broadcasting, political life and many other spheres. Fr Maloney said the presence of large crowds along the funeral route who gathered to pay their respects and mourn Gay Byrne’s passing was “right and fitting”.

“For as long as most of us can remember Gay was a remarkable presence in Irish life – a consummate broadcaster and a veritable choirmaster of the national conversation.”

The priest, who is a friend of the Byrne family said, “We have come together today – family, friends, colleagues, countless well-wishers throughout the country, especially from his beloved Donegal, where he and Kathleen so enjoyed the company of Podge and Bernie, and from further afield – to mourn the passing of Gay Byrne and to commend his soul to God. We do so gently, however, as we know that he reached the fullness of years and lived a great and memorable life, both as a family man and as a public figure.”

He told the congregation that those who were closest to Gay knew him as “a kind, generous and simple man who would counsel them always to give people the benefit of the doubt because, as he used to say, ‘You never know what they are going through’.”

Recalling his interview series, ‘The Meaning of Life’ for RTE, each one of which began with a litany of questions, “What’s it all about? Why are we here? Is there a God? What happens when we die?”, he paid tribute to Gay Byrne’s attentive listening to his interviewees as they strove to articulate what life meant to them.

“Did he have answers to the questions himself? Somewhat coyly, he wrote in the introduction to the book of the series: ‘Search me, I’m just the fella who asks the questions. Don’t expect me to be able to answer them!’ Answer them? – perhaps not. But ponder them he certainly did.”

Gay often devoted large segments of his two-hour radio programme to reading extracts from the moving and often harrowing letters sent in by women from all over Ireland telling, perhaps for the first time ever, of sufferings and violations visited on them.

He did this at a time when there was little space in the public realm for stories like these to be told. He let their voices be heard. He recognised their dignity and he validated their experience. They were precisely the ‘poor’ to whom Jesus refers in today’s gospel.

The Jesuit revealed that Gay was often seen at weekday or Sunday Mass even in the latter stages of his cancer.

When the broadcaster was anointed by Fr William O’Byrne, the uncle of his son-in-law Ronan, he simply said, “That was nice. Thank you”.

In one of his conversations with his wife Kathleen, he told her, “We’ve had a charmed life.”

Referring again to his interviews in ‘The Meaning of Life’ series, Fr Maloney recalled Gay’s interview with the actor Martin Sheen, when he put it to him: ‘Suppose it’s all true, and suppose you get to meet God at the pearly gates. What will you say to Him?’

“After hardly a pause, the seasoned actor said: ‘Deo gratias. Thanks be to God.’”

Fr Maloney concluded, “We follow Gay’s cue from his interview: For a life well lived, Gay, for all that you were, all that you gave, and all that you will be, as you shine forth “like sparks through the stubble’, we say Deo gratias. Thanks be to God.”