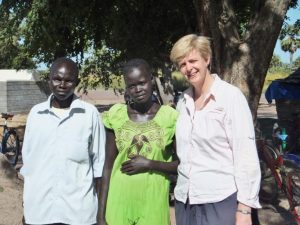 Killarney students are to present a €1000 bursary to the principal of a girls’ secondary school in South Sudan this evening.

As a new element of the Hugh O’Flaherty Humanitarian Award, students from various schools in Killarney Parish will make the bursary presentation to Sr Orla Treacy at a ceremony in the Killarney Avenue Hotel.

South Sudan is one of the poorest nations and most fragile democracies in the world. In South Sudan a 15-year-old girl is more likely to die in childbirth than she is to finish secondary school. Sr Orla will speak at the ceremony about the challenges they face on a daily basis to educate the young people of South Sudan, as a means of achieving liberty and climbing out of poverty and oppression.

Sr  Orla has spent the last 11 years in Sudan, experiencing the trauma of South Sudan becoming an autonomous independent state in 2011 followed by Civil war in 2013. Today, South Sudan is widely considered one of the most fragile states in the world with continuing conflict and unrest. Sr Orla is now the Principal of Loreto Secondary School in Rumbekin Lakes State, in South Sudan, where they have over 500 boys and girls.

Chairperson of the Hugh O’Flaherty Memorial Committee Jerry O’Grady said, “Sr Orla possesses and displays the bravery and humanitarian commitment we have come to associate with the recipients of this Award. At a young age and with a bright future ahead of her in Ireland, she decided instead to dedicate her life to those in need in what was already then a virtual war zone.”

The Monsignor Hugh O’Flaherty Humanitarian Award is presented annually to remember the Killarney Monsignor who saved the lives of over 6,500 Jews in Rome during World War II. The award will be presented by Cllr Niall Kelleher, Mayor of Killarney Municipal Authority, on Saturday evening 4th November at a ceremony in the Killarney Avenue Hotel. This year marks the tenth year of the Memorial Commemoration of the Monsignor.