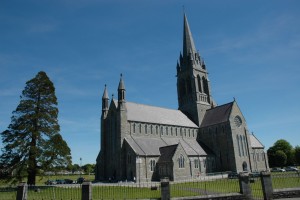 The front gates of Killarney Cathedral are to be kept padlocked when Masses are not taking place as access for funerals, weddings and the elderly is been hindered with visitors to the town using the church grounds as a free car park.

Despite appeals from the pulpit and notices in the parish newsletter, parking inside the grounds of St Mary’s Cathedral has resulted in funeral hearses and wedding parties being blocked from accessing the space.

A sign warning that parking on the cathedral grounds is only for those attending a service has been in place for several years but it has been ignored.

Speaking this week on local radio, parish priest Fr Kieran O’Brien said, “It’s not a public car park and we were left with no choice really but to lock the gates when there isn’t a service on.”

He added, “We have seen some cars parked inside the Cathedral grounds at half eight in the morning and maybe left there until six in the evening. People go off into the National Park or go into town shopping.”

“We asked people to respect the cathedral grounds for families attending a funeral or for weddings or for Masses but this has not been done.”

However, Fr O’Brien said he does not want the padlocked gates to keep church-goers away, and said that the gates are never locked when a funeral or wedding is taking place.

Masses take place each day in the Cathedral from Monday to Saturday at 10.30am and 6.15pm but often Mass-goers find they cannot park in the cathedral grounds.

“If we have a big funeral or sometimes we have two weddings, those who need the parking space are blocked out because the 25 or 30 spaces have been taken by people who are not attending any service.”

Fr O’Brien said that he hopes that “by putting a padlock on the gates, people’s habits might change and get used to the idea that the cathedral grounds are not a free car park.”