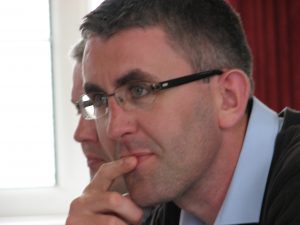 A Kilkenny parish is this weekend preparing for its second ordination in as many years.

Electronic Engineer Rev Liam O’Donovan will be ordained to the priesthood for the Pallottine Fathers at the Church of the Assumption, Slieverue, Co. Kilkenny today, 17 June, at 3.30 pm.

It is the second ordination for the parish in just under two years. In 2015 local man Fr Brian Griffin of Milepost was ordained to the priesthood at St Mary’s Cathedral in Kilkenny.

Speaking this week to the Kilkenny People newspaper, Rev Liam said his vocation was a gradual one. “It was coming up to the end of exams for electronic engineering and I said a prayer to Our Lady that if you help me out then I’ll give your way a chance. Something inside me knew that I would not be doing electronics for the rest of my life.” He added that “if anyone had told me before this that I would become a priest I would have laughed”.

Liam revealed that shortly afterwards he joined a lay community at Dunmore East, the Foyers of Charity, and volunteered there. He said “The words of Marthe Robin – the foundress of the Foyers – resonated with me: ‘Everyone can and must achieve his vocation.’

“When I heard that the Foyer was looking for lay members to join, it was the perfect solution: no study, no speaking in public, a hidden life with God. I realised that I loved living in a community and I felt from within that I had been called to go out and serve God.”

In 2010 he joined the Pallottine fathers, who are based in Dundrum in Dublin. In 2011 he went to Maynooth, where he spent two years studying philosophy and a further four years studying theology.

Following his ordination, Liam will go to work with the Pallottine Community in London.