Carlow village to host 41 pilgrims for World Meeting of Families 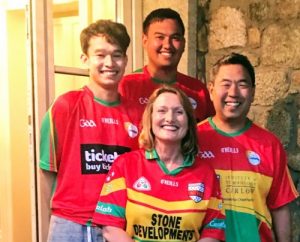 A tiny village in Carlow will host 41 pilgrims for the World Meeting of Families.

Rathvilly parish has a population of 2,500, with around 1,000 in the village and the rest in the surrounding farmland and smaller villages, some of which lie in County Wicklow. It is almost 75 kilometres to the RDS, but in spite of its distance, the parish is planning on giving its pilgrims a fine time.

One of the leaders of the hosting campaign is Bríd Saruwatari, a mother of three, who met her Japanese-Canadian husband while working in Bermuda. The Saruwatari family have been living in Ireland since 2000.

“When I heard about the WMoF I recalled all the memories of the visit of Pope John Paul II. I didn’t want the experience to pass me by,” Bríd told CatholicIreland. “I felt if I didn’t volunteer that might happen, and I’d regret that I hadn’t been more a part of it.”

Bríd volunteered and then thought of hosting. “I live in the village of Rathvilly. My husband and I are driving up the 43 miles to Dublin all the time. Maybe, just maybe, it might work as being a hosting place.”

She attended the training for hosting families and brought the idea back to the parish. Together they decided they would try to host ten families; but by June that number had increased.

“Now we’re delighted to have 41 beds in the tiny village of Rathvilly, and we’re very excited and we’re hoping that the people who come will be from the one nation and we can embrace that nation in Rathvilly.”

Parish priest Fr John McEvoy says the parish is planning a whole programme of events for the pilgrims. “I think there’ll be a barbecue and the GAA might do something one evening. It’s all in planning, it is not in stone yet.” he told CatholicIreland. 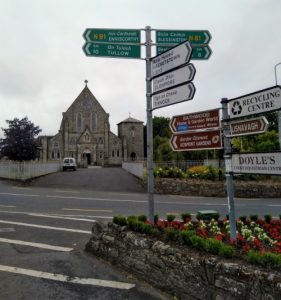 As yet the village has not heard where the pilgrims are coming from, or the time of their arrival and departure. One definite appointment will be the opening ceremony of the WMoF for the diocese of Kildare and Leighlin in Carlow Cathedral on Tuesday 21st August. “We’re hoping to have a whole lot of people preparing them packed lunches every day to bring with them to Dublin too,” said Fr McEvoy.

“We’re looking forward to it in a big way. It’s a lovely thing for the parish to be doing,” he said, adding, “I think we could be the furthest parish from Dublin hosting pilgrims.”

Meanwhile WMoF2018 spokesperson Brenda Drumm said they have been encouraged by the response to the request for host families. “We have had 1800 applications for people to be hosted by families here in Ireland and at the moment we are very close to being able to offer a host-a-family experience to each of these.”

Ms Drumm added that they still needed a few more host families to help offer the céad míle fáilte to those coming for the WMoF2018. People interested in hosting can call WMoF hosting at 01 567 6800 or email [email protected]