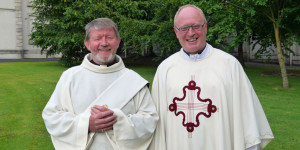 When it comes to entering the seminary “it’s not about the age”, the Bishop of Kildare and Leighlin commented as he ordained 67-year-old Fr Seán Hyland on Sunday.

In his homily, Bishop Denis Nulty expressed solidarity with older or late vocations saying, “The Irish Church owes an enormous debt to the great number of mature men who today enter seminary.”

The Bishop also suggested that “The renewal of the Irish Church will be strengthened by the determination of mature men, bolstered and supported by a loving family alongside great colleagues and friends.”

Referring to the findings of a study published last year, he said in recent years there has been a notable increase in the average age when a seminarian might commence seminary formation.

‘The Lure of the Seminary’, commissioned by the Council for Research and Development at Maynooth, research explored the typical seminary routes seminarians took before entering seminary.

“A similar study back in 1980[3], the year before I entered the seminary myself, discovered that 59% of the first year seminarians were then between 17-19 years of age. Today we have a different picture, 71% of the same first year pool are over the age of 25,” Bishop Nulty said.

Fr Seán’s background was in manufacturing management for the computer industry; he was married in 1972, widowed in December 2008, having in the much earlier years of their marriage buried their two children.

“It is all but impossible to put into words that Cross that Seán and Liz were called then to shoulder.”

According to Bishop Nulty, Seán’s experience of family life has the potential to be an enormous help to many people that he may encounter in his priesthood, bringing them hope, comfort and consolation.

Fr Seán began his journey towards the priesthood in September 2010.

“He is a powerful example of the Lord’s call coming and expressing itself in a most persistent fashion,” the Bishop of Kildare and Leighlin said and he described it as “a radical choice for Séan, who coming out of a life of professional retirement, might have continued the leisurely pursuit of following a white ball around a golf course.”

Instead the Kildare and Leighlin priest choose to respond as best he can to the challenge posed in Luke’s gospel: ‘the harvest is rich, but the labourer’s are few’.

And aren’t we all glad he has responded so generously to that challenge!

“The Diocese of Kildare & Leighlin welcomes with open arms Seán Hyland this day. We are delighted that Seán joins our ranks and we encourage the many more Seáns who find themselves in similar situations out there to reflect on the priesthood and its call.”

Bishop Nulty reiterated his invitation on Vocations Sunday last April to young people to consider exploring a vocation to the priesthood or the religious life.

“I believe that there are potential vocations in all our parishes and not just here in Portarlington – in the football clubs we play in, in the groups we hang around with, in our leaving cert classes, on our colleges courses and of course in all our families,” he said.

The Diocese of Kildare and Leighlin has 56 parishes divided into seven deaneries and has an estimated Catholic population of over 200,000.

The diocese includes all of County Carlow and parts of Counties Kildare, Offaly, Laois, Kilkenny, Wexford and Wicklow.  Patrons of the Diocese are St Brigid, St Conleth and St Laserian.

Seán attributes much of his ability to cope with such loss to his wife Liz who through unconditional love and example helped him through many years of pain, darkness, questioning and anger.

Seán worked in manufacturing management in the computer industry until his retirement in 2006.

He enjoyed a very peaceful first year of retirement – playing golf and travelling.

In April 2008, Liz was diagnosed with cancer and she died in December 2008. Through Liz’s example and support over the years, Seán’s faith had developed and deepened and he received the strength to support Liz in the way she deserved through this time.

Seán received amazing consolations in faith after Liz’s death, one part being a very deep internalisation of how safe and well Liz, their children, parents and brothers and sisters are for all eternity, united in the presence of Jesus.

This gave Seán a deep sense of peace which continues to this day. This in a very practical sense caused Seán’s prayer to be “Jesus my life is yours, let me know what you want me to do”.

In April 2009, Seán read a newspaper article profiling vocations at Maynooth seminary including some mature students.

He made contact with a first year student who was 62 years of age, with a family background similar to his own.

Seán approached his parish priest Fr Thomas Dooley in July 2009 and started the process of discerning a vocation to the priesthood.

He was then introduced to Father Ruairi O’Domhnaill, Vocations Committee Chairman for Kildare & Leighlin.

Seán commenced his formation for the priesthood at the Beda College in Rome in late September 2010, which offers a specialised formation programme for late vocations.

Bishop Nulty thanks the Pontifical Beda College in Rome where Fr Sean’s formation was indeed discerned and directed, and where the programme of formation of last year’s diocesan ordinand, Fr Terence McGovern, also took place.