Bishop Denis Nulty announced on Sunday that the Diocese of Kildare and Leighlin will be twinned with the Diocese of Maiduguri in north eastern Nigeria for WMF2018.

Addressing up to 2,000 families who turned out for Kildare and Leighlin’s Family Picnic Day at Punchestown Racecourse, he said the Nigerian diocese had been “traumatised by the savagery of Boko Haram”.

The people of Kildare and Leighlin’s 56 parishes will welcome families from Maiduguri and host them in the lead-up, during, and in the days after WMF2018 which takes place from 21–26 August 2018.

Among those who attended Sunday’s picnic, which officially launched preparations for next year’s World Meeting of Families in the diocese, were the president of WMF2018, Archbishop Diarmuid Martin, and the new papal nuncio to Ireland, Archbishop Jude Thaddeus Okolo from Nigeria.

Families from two direct provision centres in Newbridge and Portlaoise and up to 100 Syrians from the refugee centre in Monasterevin were also invited and the picnic baskets were provided for them by the diocese. 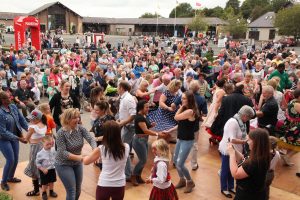 Most of the Syrians were from the capital Damascus and had fled to refugee camps in Lebanon, where they were forced to stay up to four years in some cases. The majority of them were Muslim.

Speaking to CatholicIreland.net, Bishop Nulty said Muslims would be “very welcome to participate” in WMF2018 as well as all faith traditions and none “once they share a vision of family that we ourselves share which is that families are good for society and the bedrock of society”.

Addressing the crowd who enjoyed an afternoon of music and entertainment, Bishop Nulty noted that on that very Sunday next August “We’ll be celebrating the closing Mass of the WMF – hopefully in the presence of Pope Francis.”

He also highlighted that 27 August was the feast of St Monica, the mother of St Augustine, whom we are told “shed many a tear over her son and prayed for his conversion”.

Bishop Nulty said “Their family reminds us that there is no such thing as a perfect family. And if you find yourself sitting in the midst of this imperfection you are in good company with St Monica and St Augustine”. 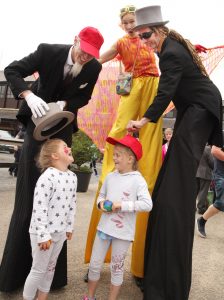 In his address, Archbishop Diarmuid Martin said the World Meeting of Families was “about the love of parents for their children” and that this was marked with “moments of joy, anxiety, worrying about making ends meet, being with your children when things look as if they are going wrong but also being there in a place that the child knows that they will always find support and appreciation even if things do go wrong.

“We talk a lot about the challenges of family life but those of you who are here today are here because you know that overall the family brings a fulfilment into your lives that is quite unique. The love of parents, the love of godparents – it is what keeps society together.”

Archbishop Martin stressed that family is the place where faith is transmitted and that love alone is what brings fulfilment into our lives.

“Teach your children the value of faithfulness and loyalty in every aspect of their lives. Teach them the value of solidarity and giving and sharing,” he said, and added that “good neighbourliness is something that we have to cherish and strengthen”. 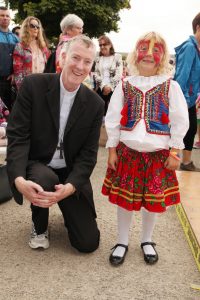 The well-known composer Fr Liam Lawton said he hoped that WMF2018 would help families to come together and recognise that “there is a supernatural power to help us – God is there in the midst of all our brokenness, in the midst of the blessings, and the joys and the sorrows.”

Speaking to CatholicIreland.net, the musician said, “If you look around the world, you see so many communities that have been disenfranchised and the one unit that really has been very important for people is the family. It comes in all kinds of guises – the extended family, the immediate family, the communal family.

“In communities where there is war and conflict, families are broken up and have an awful lot to contend with. We have homelessness here and social challenges but I think that there always has to be room for others.

“Hopefully we’ll be able to do something in Ireland to show these families that there is hospitality and reconciliation.”