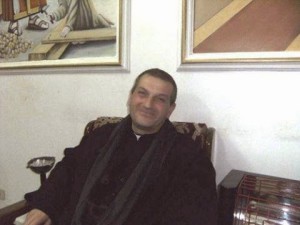 A Syrian Catholic priest who was kidnapped five months ago by Islamic State militants in central Syria has reportedly been freed.

Fr Jacques Mourad is said to be in the village of Zaydal about 5 kms from the Syrian city of Homs.

The priest belongs to the community of Mar Musa El Habashi, founded by Jesuit Fr Paolo Dall’Oglio who was kidnapped on 29 July 2013 in al Raqqa, the current stronghold of the Islamic State.

Fr Mourad, who is Superior at the Mar Elian Monastery and pastor of the community in Qaryatayn, was kidnapped last May when three armed gunman rode a motorcycle into the monastery and seized him along with a deacon.

Mar Elian is located 60 kms southeast of Homs. The monastery had been receiving a massive influx of refugees from the fallen city of Palmyra and was therefore targeted by the Islamic militants.

The circumstances around his release are not yet known.

Separately, Pope Francis appealed for reconciliation and peace in the Middle East and Africa on Friday, at the opening of the morning session of the Synod assembly in the Vatican.

The appeal came as the Pontiff addressed the Synod Fathers and other participants at the start of their second round of meetings in general congregation.

“We are painfully struck and we follow with great concern what is happening in Syria, in Iraq, in Jerusalem and the West Bank, where we see an escalation of violence that involves innocent civilians and continues to fuel a humanitarian crisis of enormous proportions,” the Pope said.

“War brings destruction and multiplies the sufferings of peoples. Hope and progress come only from choices for peace. Let us unite, therefore, in an intense and confident prayer to the Lord, a prayer that intends to be an expression of solidarity at once with [our] brother Patriarchs and Bishops from those regions, who are present here [at the Synod Assembly], as well as with their priests and faithful, and to everyone who lives there.”