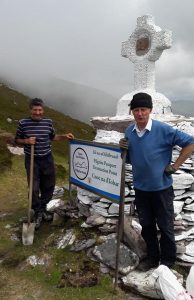 Frank McGill (on left) and Johnny Keating (on right)

A County Kerry native has this week spoken of his delight at becoming one of the first pilgrims in the country to complete Ireland’s pilgrim path route. Caherciveen native Johnny Keating has become the first Kerry person to complete an Irish pilgrim journey totaling 120 kilometres.

Mr Keating completed five pilgrimages in a number of weeks completing the final path Tochar Phadraig in late June and was recently presented with a special passport by Pilgrim Paths Ireland. Johnny is the first Kerry “Críochnoir” as a result and was presented with his Teastas Oilithreachta (completion certificate) by Fr Frank Fahy from Ballintubber Abbey in County Mayo. The 71 year old has enjoyed long distance walking since he was a child and now has his sights set on the Camino in Spain.

Speaking this week on Radio Kerry he said ”I have been up and down the local mountains in County Kerry since I was knee high. We have a local walking group here which is an outdoor walking club and runs plenty of activities. We go walking every Sunday. We have been all round Kerry and we have been all over Europe as well as in Germany and Italy undertaking various walking routes. Thank God I am fully fit and able for it. I am now looking forward to taking on the Camino in Spain”.

To date nine criochnóirí recently completed their Irish pilgrim journey. These participants have walked all five paths as required by local custom, obtained the necessary 5 stamps on Ireland’s Pilgrim Passport and were then awarded a Teastas Oilithreachta (completion certificate).

The Pilgrim Paths of Ireland are a collection of ancient religious routes around the country which have documented claims to having been used by pilgrims since ancient times. There are pilgrim paths in Donegal, Offaly, Mayo, Kildare, Wicklow, Clare, Tipperary, Kerry, Waterford and Cork.  For further information see www.pilgrimpath.ie.