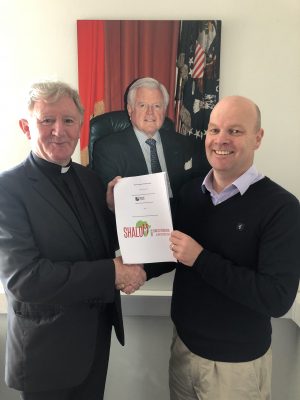 Fr Patrick Devine SMA of the Shalom Centre in Kenya and Dr Kieran Doyle of the Kennedy Institute at Maynooth University with painting of Senator Edward Kennedy in the background.

An institute founded by an Irish missionary to promote peace-building in conflict environments in Eastern Africa has renewed its strategic partnership with the Edward Kennedy Institute for Conflict Intervention at Maynooth University.

The Shalom Centre for Conflict Resolution and Reconciliation (SCCRR) was founded in Kenya by Fr Patrick Devine SMA in 2009.

It is a non-political, non-profit and non-sectarian organisation which is also inter-religious.

The centre is committed to conflict transformation through peace-building and to the transformation of social contexts that give rise to structural violence and the abuse of human rights.

It tries to stop the killing, maiming and displacement in conflict situations. When that is achieved, it helps all sides to become mutually committed to human security, development and the interdependent well-being of each other.

The Edward M. Kennedy Institute for Conflict Intervention at Maynooth University and the Shalom Centre for Conflict Resolution and Reconciliation in Kenya signed the Memorandum of Understanding (MoU) as part of a renewal of their strategic partnership.

The signing took place at the University in Maynooth in the presence of Peter Cassells, Executive Director of the Kennedy Institute and Rev Dr Patrick Devine, Executive Chairman of Shalom.

He said it would also help foster a greater appreciation for the history of conflicts and the resilience of conflict memory.

“This will be realised through applying the highest academic research standards, thereby, countering the alarming dangers of unfounded speculation and conjecture as to the root causes of conflicts. Shalom in collaboration with the Kennedy Institute is looking forward to mutually advancing knowledge of conflict management processes and peace-building techniques in conflict environments,” the Irish missionary said.

In this programme, students absorb the architecture of peace-building with modules on mediation, peace processes, conflict analysis, and the integrated approach of working with multiple actors, such as governments, security actors and NGOs.

“It is a priority that these students continue to learn from the experiences of Fr Devine and his colleagues who reflect the accumulated wisdom of Irish missionary influences on peace and justice,” Dr Doyle said.

He added, “When Fr Devine speaks, you discern, not only theories of peace-building but also the raw challenge of working with remote communities struggling for hope in ethnic and resource-based conflict.”

Both organisations are to organise mutually beneficial study visits and exchanges for academic staff and students.

The Kennedy Institute will facilitate publication of Shalom research via the online Journal of Mediation and Applied Conflict Analysis.

Both organisations will also work together to establish a virtual joint learning laboratory where joint research projects are conducted and learning generated will inform academics, policy-makers and practitioners. The learning laboratory will thus bridge the gap between practice and the academy.

Signing the MoU, Peter Cassells said that the Kennedy Institute was looking forward to greater involvement by Shalom in the years ahead.

Fr Devine is to spend some time based at the Kennedy Institute in Spring 2020.