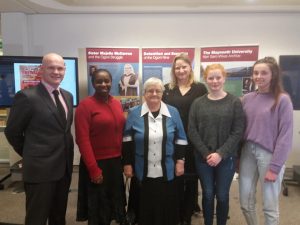 Srs. Majella and Patience with John and Trish of Trocaire and Trocaire interns Muireann and Olive.

Sr Majella McCarron has launched the ‘Silence Would Be Treason’ ebook about Ken Saro-Wiwa, who challenged the Nigerian government and the might of oil multinationals 22 years ago.

“In his last letter to me, Ken said ‘Don’t ever forget the Ogoni people’. Thanks to the community of solidarity for making this possible,” said Sr Majella McCarron.

The ebook launch on 14th November formed part of an annual Maynooth University Library event commemorating the execution of the Nigerian man Ken Saro-Wiwa and his eight colleagues – known as the ‘Ogoni Nine.

They campaigned against oil production in an area of the Niger Delta, claiming that it caused extreme environmental damage arising from years of exploitation. The group was later sent to prison and all were executed on 10th November, 1995.

Sr Majella McCarron, and an OLA sister, first met Ken Saro-Wiwa during the last 18 months of his life, while she was lecturing at the University of Lagos in 1993. She became his messenger to the outside world while he and the other members of the Ogoni Nine were imprisoned. During this time, Ken Saro-Wiwa sent 28 letters and 27 poems to Sr Majella, some of which were smuggled out in food baskets. These letters and poems have since been donated by Sr Majella to Maynooth University to form part of the Ken Saro-Wiwa Archive.The letters and poems also formed the basis of Silence Would Be Treason which was compiled by Helen Fallon, Laurence Cox and Íde Corley of Maynooth University. 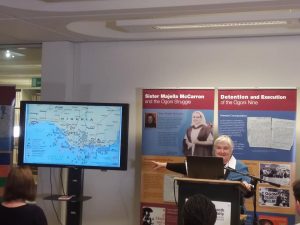 Sr Majella launches the ‘Silence Would Be Treason’ ebook.

Silence Would be Treason: Last Writings of Ken Saro-Wiwa’ is the latest e-book, written  by Sr Majella McCarron, and features “a unique collection” according to Amazon.com which stated it, “reveals the indomitable mind and spirit of the legendary campaigner for justice in the last months before his execution.”

Amazon.com also states, “Clear and direct, these letters and poems are the last expression of a voice the regime was determined to silence: a voice for indigenous rights, environmental survival and democracy, many of whose battles were won despite his death and whose voice comes alive today again in these extraordinary letters.”

The book launch took place following a seminar at which the keynote address was delivered by Mark Dummett, who is a Business and Human Rights researcher at Amnesty International. Mr Dummett previously worked as a correspondent for the BBC.

Other speakers included Fr Samuel Udogbu, a Spiritan priest from Nigeria, and Mr Graham Kay, both doctoral students at Maynooth University. Graham is completing his doctoral studies at the third level institute under the Ken Saro-Wiwa Postgraduate Scholarship Programme.

In 2015 Noo Saro-Wiwa, launched this award which was awarded to Graham Kay who planned to use the €2,000 to fund research in Germany for his PhD thesis entitled, The First Oil War: Great Britain, Germany and the race for oil, 1896-1921 which was to explore why government policy became so intrinsically linked to the issue of oil.