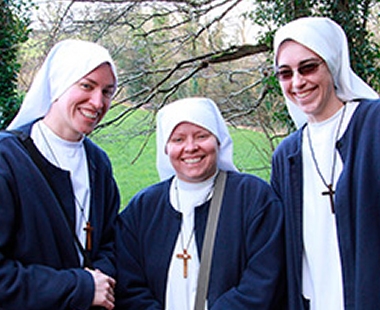 People should not speak against the Lord’s name. Taking the word ‘blasphemy’ out of the Irish Constitution is allowing people to “insult God and no one can say anything about it,” according to the Servant Sisters of the Home of the Mother, based in Roscommon.

As the charism of the Sisters involves “the conquest of young people for the Lord”, they regularly use social media to spread their message. In the lead-up to the referendum taking place today on blasphemy, the sisters circulated a short video to all their contacts.

To drumbeats, the words “Are you a person who loves God? Do you believe in living a moral life? Would you be offended if someone offended a person you love?” come up on the screen of the 26-second video. It continues: “26 Oct could mark a change in Irish morals. If you who love God vote Yes, the one you love will be mocked, ridiculed, blasphemed. So if you love God, vote No. Keep God in Ireland.”

“If there was no interest in getting God out of the Constitution they would never have put this forward,” Sr Ruth Maria O’Callaghan, leader of the five-strong community in Roscommon, told CatholicIreland. “It is a way of getting Him out of the way” so people can do “anything they want”. The video was to make people aware of the “graveness” of the referendum.

According to Sr Ruth Maria, the video, which was circulated via email, together with a newsletter on 22 October, has evoked a positive response. “A lot of people are writing back and sharing it on Facebook. We haven’t got [back] anything negative. They are congratulating us on doing something.”

If someone is going to offend someone in your family, continued the Dublin Sister, would you not defend them?  If they are going to insult your mother or your father then it is normal that you can defend them. “So Catholics can stand up – that’s normal as well.”

Article 40.6.1˚ of the Irish Constitution currently says that publishing or saying something blasphemous is a punishable offence under the law.

The legal definition of blasphemy is contained in the Defamation Act 2009. Under this act, a person is determined to have published or said something blasphemous if they publish or say something that is grossly abusive or insulting to matters held sacred by any religion, thereby causing outrage among a substantial number of the adherents of that religion or intend to cause that outrage. There is no prison sentence for breaching the law but a person can be fined up to €25,000 on conviction. To date no one has ever been prosecuted in Ireland under the legislation.

In the statement following their autumn meeting, the Catholic bishops said the reference to blasphemy was “largely obsolete and may give rise to concern because of the way such measures have been used to justify violence and oppression against minorities in other parts of the world”.

The bishops reiterated, however, that the promotion of freedom of religion and conscience was an aspect of “respect for the dignity of human persons. The human right of faith communities to contribute to public life, including public debate on issues that are of importance to everyone, without being subjected to attack or ridicule, needs to be acknowledged and respected,” they added.

Their short video may be viewed at: https://drive.google.com/file/d/1KbjH_dVhqAqk8tayux9uQW5xzpzlmz7P/view.