Home > News > Joy of the Gospel sells out in Veritas stores

Joy of the Gospel sells out in Veritas stores 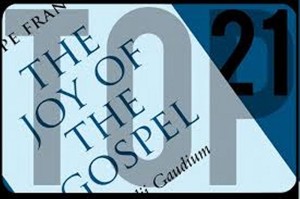 Pope Francis is “stirring the imagination of people” evoking an unprecedented interest in papal documents according to the Director of Ireland’s largest religious publishing house, Veritas.

Maura Hyland told CatholicIreland.net that such has been the public interest in Evangelii Gaudium – The Joy of the Gospel, that the company has had to reprint a further 3,000 copies to meet the Christmas demand.

So far the encyclical letter has sold 4,500 copies since it was published two weeks ago.

The Joy of the Gospel by Pope Francis

“You don’t sell those kind of numbers normally,” she said.

Pope Benedict XVI’s series of books on Jesus of Nazareth sold well she said, but “this is something different, because it is a papal document. The interest is quite extraordinary.”

According to Catriona Clarke, Manager of Publications at Veritas, there is a great “appetite” for the Pope and what he has to say.

She described “customers queuing in our Abbey Street store waiting on copies of the Apostolic Exhortation to arrive”.

Another Veritas title, Pope Francis: Words of Mercy and Joy, which brings together some of the main themes of his pontificate to date is also selling well, as did his first encyclical, Lumen Fidei.

The publishing house was one of the first booksellers to publish a short biography of the newly elected Pope Francis: Pope Francis: The Jesuit Pope and what we can expect from him.

The short booklet, written by Brian Grogan SJ, discussed what being a Jesuit would mean for the pontificate and sold very well on its release and has continued to sell strongly all year.

“We received word recently that a copy of it had made it into Pope Francis’s hands, and that he was very taken with it,” Ms Clarke told CatholicIreland.net.

This year Veritas Publications published 30 titles across a diverse range of topics.

Strong sellers included The Family Prayer Book, released in September, which was commissioned by the Council for Marriage and the Family.

“Also our newly published textbook for Leaving Certificate students, Seek and Find, has had excellent feedback from teachers across the country,” Ms Clarke said.

Strong performers from other publishers were YouCat and the YouCat prayer book while Colm Keane’s book, Scent of Roses: Padre Pio, sold out over Christmas in a number of Veritas stores.

The book, as the website, guides the reader simply and gently through a few stages of preparation and prayer.