Joy and excitement as 2,000 Dublin pilgrims leave for Lourdes 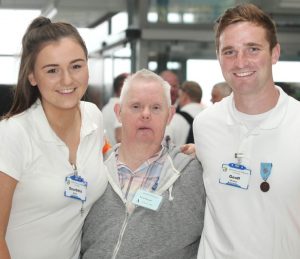 There was a palpable excitement yesterday in Dublin airport as capacity numbers of sick pilgrims left aboard ten flights bound for Lourdes with the Dublin Diocesan Pilgrimage to the French shrine.

“The silence of Lourdes helps us to move beyond thinking about ourselves and begin to see others differently. Illness and physical or mental frailty are not looked on as reducing the dignity of anyone,” said Archbishop Martin, who is making his 14th pilgrimage to Lourdes as Archbishop of Dublin.

“Here in Lourdes it is the sick and the weak who have pride of place and who become central in our interaction. This is the experience of our helpers, young and old, veterans of the pilgrimage and those who are here for the first time.”

Prayer and silence help us to relate with others in a different way, he added. “It is that experience which brings our helpers back to Lourdes year after year.” 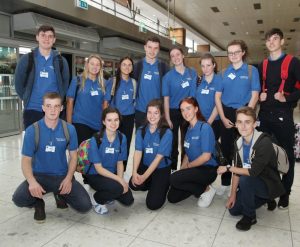 Organisers of the pilgrimages to the French Marian shrine were taken aback at the level of demand this year, the highest for many years.

Around 70 volunteers arrived in Lourdes in advance of yesterday’s departure, preparing for the arrival of the sick, who will be staying at the Accueil Notre Dame, a clinic close to the Grotto in Lourdes, with many of the facilities of a modern hospital.

Among the pilgrims this year are a group from the Deaf community accompanied by Chaplain Fr Gerard Tyrell and six signing volunteers to assist with the group’s needs.

In addition, over a hundred secondary students from schools throughout the Archdiocese are travelling – including for the first time students from Coláiste Chill Mhantáin and Maryfield College in Drumcondra.

A further 300 young adults are joining the Youth Group, and there are 45 nurses and 8 doctors. Both Crosscare – the social care agency of the Archdiocese of Dublin – and the Diocesan Child Safeguarding and Protection office are represented among the pilgrims. 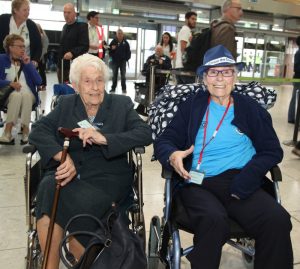 The first Dublin Diocesan Pilgrimage to Lourdes took place in 1949. According to the Dublin diocesan website, the fare for the five-day event was £33.

Pilgrims, including 38 sick people, left on Monday morning 8 August 1949, after Mass celebrated by Archbishop John McQuaid. All had been fasting since midnight.

They then took special trains to Dun Laoghaire to embark on the steamer SS Princess Maud for Holyhead. The pilgrims continued on to London for an overnight stop, travelling the next day to Folkestone and Boulogne and then by non-stop train to Bordeaux. “Here, there was a short stop for Mass in the Cathedral and then on to Lourdes, arriving several hours later. The journey took almost two and a half days,” says the site.

The mode of transport may have changed since that first pilgrimage, but the enthusiasm of the pilgrims is just as strong.