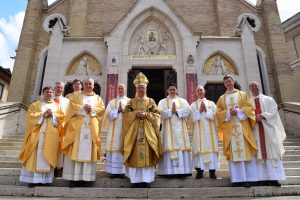 Archbishop Diarmuid Martin of Dublin ordained three seminarians from the Irish College in Rome as deacons yesterday, warning them against the dangers of clericalism in his homily.

In the Church of St Alphonsus in Rome on Tuesday, Rev James Daly (57), originally from Midleton, Co Cork, and a former parish pastoral worker and teacher, and Rev Robert Smyth (32) from Knocklyon in Dublin, a former management consultant, were ordained for the Archdiocese of Dublin.

Rev Seán Mulligan (46) from Knockatallon, Co Monaghan, a former intellectual disabilities nurse, was ordained for the Diocese of Clogher.

In his homily, Archbishop Martin, who was the lead celebrant, said the journey of the missionary disciple must be a journey of respect, encountering people who they may not always like, but who they must always attempt to understand.

He said the context in which they made their journey would be a pluralist one, “where we may attract others to our views but not impose them”.

The Archbishop stressed that they would not heal those whose lives have drifted from Jesus Christ “by throwing books of dogma at them. That would only mean shouting at them in a language that they still have to learn.”

Where that is not understood, the temptation towards “a dangerous clericalism” can arise, he said, and he recalled Pope Francis’ definition of clericalism as that which “forgets that the visibility and sacramentality of the Church belong to all the People of God not only to the few chosen and enlightened.”

He exhorted the three deacons to “Believe what you read, teach what you believe and practice what you teach” as a mandate to live a life of integrity and coherence with the Gospel.

Family members and friends of the new deacons travelled from Ireland to be present at the ceremony in the Church of St Alphonsus, which is in the care of the Redemptorist order and houses the original icon of Our Lady of Perpetual Help.

They heard the Archbishop pray that the new deacons would “maintain that integrity of life and ministry” as he prayed for all, whatever their calling in the Church.

All three deacons are due to be ordained to the priesthood next year.

The Pontifical Irish College in Rome was founded in 1628 and has been educating trainee priests for the Irish church for almost four hundred years. Currently, there are fourteen seminarians from Irish dioceses in formation at the College. There are 41 resident seminarians studying at Maynooth.

Commenting on the ordination, the rector of the Irish College, Mgr Ciarán O’Carroll said, “It is with great joy that we celebrate the ordination to the diaconate today of three seminarians from the Pontifical Irish College in Rome.

“May they experience God’s grace anew in their lives so that they may courageously proclaim the Gospel in word and deed, generously serving the people of God in their various dioceses with care and compassion.”