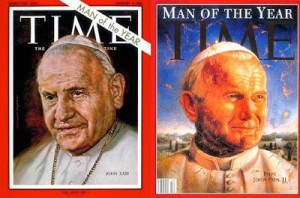 The date for the joint canonisation ceremony has been set for 27 April 2014, the day on which the Church celebrates the Second Sunday of Easter and the feast of the Divine Mercy, which was established by John Paul II.

It was on that same feast day that John Paul II was beatified in 2011, drawing 1.5 million pilgrims to Rome.

In July, Pope Francis signed a decree calling for the canonisation of the two former pontiffs. There had been speculation that the joint ceremony might take place before the end of this year.

However, the later date provides Vatican organisers with more time to plan for what is likely to be a massive attendance for the ceremony.

The announcement of the date for the canonisations had been expected since July when Francis approved a second miracle attributed to John Paul, opening the way to the fastest canonisation in modern times.

He also approved sainthood for John, who was pope from 1958 to 1963 and oversaw the reforms of the Second Vatican Council, even though he has only been credited with one miracle since his death.

Analysts have said the decision to canonise them together is aimed at unifying the church.

On the anniversary of John Paul’s death this year, Pope Francis prayed at the tombs of both of his predecessors in what commentators have interpreted as an indication that he sees a spiritual continuity in them.

According to the Daily Telegraph, Pope Emeritus Benedict may join Pope Francis at the canonisation ceremony, making it the first ever time two living popes honour two dead ones at a saint-making ceremony.

Fr Federico Lombardi, the Vatican spokesman said there was no reason why Benedict would not take part in the ceremony.

“There’s no reason – either doctrinal or institutional – that he couldn’t participate in a public ceremony,” he said. “I don’t have any reason to exclude it.”