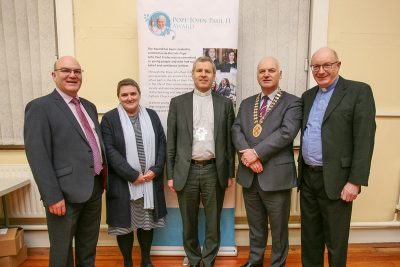 Bishop Fintan Gavin launched the John Paul II awards in the diocese of Cork and Ross last Thursday almost exactly thirteen years to the day after they were first launched in November 2006.

This is the first time that Cork and Ross has officially participated in the awards which run in other dioceses across the country.

They are named after the Polish Pontiff who was the first pope to visit Ireland in 1979.

Thirteen years ago on 7 November 2006, the then Papal Nuncio to Ireland, Archbishop Giuseppe Lazzarotto, officially launched the scheme in the diocese of Derry.

The John Paul II award recognises young people aged 16+ who engage in parish activities, a social awareness project and in developing their faith. The scheme aims to recognise the social action of young people and help them connect with parish.

The award is non-competitive, flexible and voluntary and requires an ongoing commitment from participants.

The awards also help young people to understand that religion and faith is not just about learning a list of rules, but that it is for living.

The awards programme across the country is supported by the Knights of St Columbanus, a Catholic lay organisation.

Launching the scheme last Thursday in Cork and Ross at two events, one in Blackrock parish centre in Cork City and the other in Clonakilty, Bishop Gavin invited the schools and parishes of his diocese to take part.

Students and representatives of parishes and schools were addressed by Fr Paul Farren who founded the awards. They also heard from the Supreme Grand Knight of St Columbanus, Gerard Harbison, as well as Tony Brennan, the National Coordinator of the John Paul II scheme.

Meanwhile, on Monday, Bishop Denis Nulty of Kildare & Leighlin tweeted about the first of two nights when 371 John Paul II award recipients in his diocese received their honours in Carlow Cathedral.

“Most enjoyable” evening, Dr Nulty said and added, “blessings on all these wonderful young people and their contribution to our church”.

For more about the John Paul II Awards see https://thepopejohnpauliiaward.com/