John McAreavey has spoken of his personal experience of mercy, forgiveness and learning to love life again following the violent death of his wife on their honeymoon five years ago. 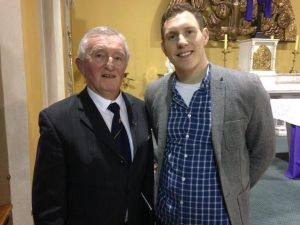 Speaking at the Monday at the Monastery series of talks with the Presentation Brothers and Glasthule parish in south Dublin, he posed the question: “What have I learned about mercy and forgiveness from my own ordeals?”

He said the answer has gradually come to him and has required an open heart and mind.

The well-known former GAA player from Co. Down explained that forgiveness does not mean shutting off feelings about the subject or situation. Nor does it mean that there are no further issues to deal with and that everything is OK. One should not forget that the incident or situation happened.

“By forgiving you are simply accepting the reality of what happened and you are finding a way to live in a state of resolution with it,” he explained.

This understanding has taken him time and energy and reflection, and only in recent times has the “real energy” of his life returned.

“The world is now a much more beautiful place again, that’s for sure. I am able to love again, which is huge. More importantly now I know that I am able to deal with absolutely anything that life will throw at me because I always know that God is at my side,” he said.

Also present in the 200-strong audience at the talk was his new wife, Tara Brennan, whom he married in late 2015.

In the thirty-minute talk he stressed that he seldom speaks about his very personal experience and pain of losing a loved one and of the injustice. Two hotel workers in Mauritius who were accused of murdering Michaela were acquitted.

He feared that he could not bear such a heavy cross. In these darkest moments he offered up what was left of his life to God because he felt he had nothing left.

He spoke of the aftermath of the murder of his wife and that with such “raw emotions” he had real difficulty in praying the ‘Our Father’, in particular the lines “Forgive us our trespasses, as we forgive those who trespass against us …”

He felt coerced by this line; however, he realised that there is no timeframe for forgiveness.

At times his frustration and confusion came to the fore and he felt like asking God “What are you playing at?” He felt the support of God and the Holy Spirit and that perhaps God had already planted the seed of mercy in his heart. While his experience was extreme and tragic, everyone has some bitterness towards someone in their life which they need to embrace with mercy, he said.

John McAreavey has set up a charity, The Michaela Foundation, in memory of his wife. Michaela McAreavey was a young Irish teacher from near Ballygawley, Co. Tyrone, Northern Ireland. She was the daughter of Tyrone Gaelic football manager Mickey Harte. She had been the Ulster Rose at the 2004 Rose of Tralee and was involved in the GAA.

The Michaela Foundation organises summer camps for young people and reflects aspects of Michaela’s life, such as her faith and interest in sports and beauty. The Foundation describes itself as promoting values that encourage young people to succeed in life, fulfilment and happiness, with faith, confidence and fun. 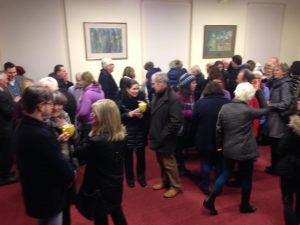 There was an overwhelmingly positive response to John McAreavey’s talk. The second talk continued last night (13 March) with another sports personality, George Hook, who is a past pupil of Presentation College Cork.

The Monday at the Monastery series of four talks continues with Maria Steen of the Iona institute on 20 March, and Marianne Quinn, a hospital chaplain on 27 March. The Lenten series has been prepared by the Presentation Brothers and St Joseph’s Parish, Glasthule, Co. Dublin.

Past speakers have included John Waters, business coach and trainer, Elizabeth Garry-Brosnan, and Alan and Dianne Morris who spoke on marriage and parenting.

For audio of talks and further details see http://www.presentationbrothers.org/.