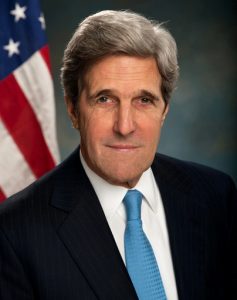 US Secretary of State John Kerry is to receive the 2015 Tipperary (Ireland) International Peace Award.

The announcement was made by the Tipperary Peace Convention through its Honorary Secretary, Martin Quinn.

Speaking about Mr Kerry’s selection, Mr Quinn said that Secretary Kerry was chosen “for his work on a global basis for bringing about an end to conflict in many countries most particularly in Syria”.

He noted that the US politician’s efforts had led to negotiations which led to the destruction of Syria’s declared chemical weapons.

He has also helped establish the International Syria Support group which is a group of over 20 countries which are working together to find a political solution to end the conflict in Syria.

He said they also looked at his work in Iran, Afghanistan and South China.

Responding to the news of his selection, Secretary Kerry said, “I am grateful to be selected for the Tipperary Peace Award. I am truly honoured to be listed among the remarkable past recipients who have contributed so much to the cause of creating a more peaceful world.”

The Award will be presented to Secretary Kerry at a ceremony at Ballykisteen Hotel near Tipperary Town later this year.