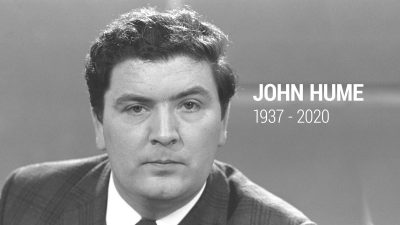 The removal of the late John Hume, peace maker, Nobel Peace laureate and former leader of the SDLP, takes place today at 5pm in St Eugene’s Cathedral in Derry.

The Funeral Mass for Mr Hume will follow on Wednesday at 11.30am and will be concelebrated by Fr Paul Farren, Administrator of St Eugene’s, and Bishop Donal McKeown of Derry.

Just 80 people will attend the service due to the strict limitations on numbers in accordance with COVID-19 regulations. However, his family have indicated that a celebration of his life will take later when restrictions are lifted.

The Funeral Mass will be broadcast at 11.30am on RTÉ One and also televised on RTÉ News Now, and on its online and digital platforms. In addition, the Mass will be live-streamed on http://www.steugenescathedral.com/webcam.html

Following the news of John Hume’s death early on Monday morning, tributes were paid by a host of international and national political leaders as well as church leaders across the island of Ireland.

In his statement, fellow Derry man, Archbishop Eamon Martin, Primate of All Ireland, described Mr Hume as “a paragon of peace”.

Archbishop Martin said a great sadness had descended on Derry following the death of “one of our greatest sons”.

“That sadness ripples out to every corner of Ireland and all around the world where the mere mention of the name of John Hume evokes admiration, respect and thanksgiving for a life dedicated to peace and social justice.”

Dr Martin said that as a young person growing up in Derry he was hugely influenced by this “man of principle”.

He said that for him and many other pupils of St Columb’s College, John Hume was one of their heroes and role models. “When I went to study for the priesthood at Maynooth I was happy to know that he too had once been a seminarian for the Diocese of Derry. But John’s vocation was to serve God and his community as a layman, and he totally devoted his energies to that vocation – to relieving poverty, challenging injustice and providing decent living conditions for all.”

Eight years ago, Archbishop Martin brought news that Pope Benedict XVI had conferred on Mr Hume a papal knighthood in recognition of his commitment to peace, reconciliation, non-violence and social justice.

It was one of a number of prestigious awards bestowed on John Hume, including the Gandhi Peace Prize, the Martin Luther King and the Nobel Peace Prize in 1998.

“John put Catholic Social Teaching into practice – sometimes at great personal cost and risk – working ceaselessly for a process of reconciliation through which the dignity of every human person is recognised and upheld,” Archbishop Martin said and he added that this was best summarised in the words of his Nobel Laureate speech:

“I want to see Ireland as an example to men and women everywhere of what can be achieved by living for ideals, rather than fighting for them, and by viewing each and every person as worthy of respect and honour. I want to see an Ireland of partnership where we wage war on want and poverty, where we reach out to the marginalised and dispossessed, where we build together a future that can be as great as our dreams allow.”

Dr Martin said on Monday, “Today we are remembering a paragon of peace, a giant of a statesman whose legacy of unstinting service to the Common Good is internationally acclaimed, even though it is still perhaps only unfolding.”

Bishop Noel Treanor recalled Mr Hume’s work on the European stage. As a member of COMECE he had met him in his role as an MEP and as Vice-President of the Socialist Group.

“As an MEP, John was also a Member of the Committee on Regional Policy, Transport and Tourism and a Substitute Member on the Committee on Agriculture and Rural Development, all of which evidenced his deep commitment to his electorate and the wider region,” the Bishop of Down and Connor said.

He added that Mr Hume was motivated by a strong personal faith and the needs of the community.

“John was a champion of Human Rights. He actively sought to protect the most vulnerable across society. He exercised and exemplified a model of civic leadership through dialogue. John had a visionary capacity to view the local political and societal challenges through the wider prism of human dignity and International partnership.”

As a co-recipient of the Nobel Peace Prize with David Trimble, John Hume would be fondly remembered as “an architect of reconciliation and peace in Northern Ireland, especially in his home city of Derry”.

Dr Treanor underlined that John Hume “uniquely shaped a new and prophetic political narrative which enabled the decommissioning and disarmament of weapons and generated an infrastructure for a peace process that led to the Good Friday Agreement, and the foundations of a new politics that is his lasting legacy.”

Other church leaders who paid tribute to Mr Hume included Bishop Donal McKeown of Derry who described him as “one of the greatest peacemakers and champions of social justice of our time”.

He said the SDLP politician had dedicated his life to the welfare of this community, at no small cost to himself and that his name became a byword for dedication to the cause of peace, whatever the obstacles or criticisms.

The Church of Ireland Primate of All Ireland, Archbishop John McDowell, paid tribute to Pat Hume’s “exemplary and inspiring” care for her husband over his last illness.

This had required “enormous patience and sympathetic understanding and those of us who are the beneficiaries of his legacy can only regret his passing while, at the same time, being thankful for his gargantuan efforts in the cause of peace and good relations.”

The Church of Ireland Archbishop of Dublin said that, “During turbulent and troubled times, John Hume put his shoulder to the wheel in the service of dialogue and peace.”

“He did so for people right across Ireland who lived in fear of the present and in hope of a brighter future. The fruit of his legacy remains the Good Friday – Belfast Agreement. We honour his memory, give thanks for his courage and pray for all members of his family,” Archbishop Michael Jackson said.