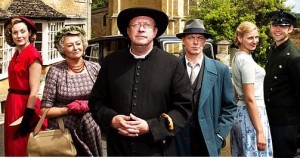 A London-based Jesuit has acted as religious adviser in the third series of BBC Drama, Father Brown, which began airing on BBC1 this week.

Father Tony Nye SJ of Farm Street Jesuit Church was invited to vet the scripts and attend recordings of the TV series based on the character created by GK Chesterton, to ensure authenticity and accuracy in the portrayal of a Catholic priest in the days before the Second Vatican Council.

Father Brown is a fictional character created based on Fr John O’Connor who was born in 1870 and died in 1952.

He was a parish priest in Bradford who was involved in the conversion of novelist Chesterton to Catholicism in 1922.

Fr Brown went on to feature in 51 detective short stories by GK Chesterton, which have been adapted into productions for television, film and radio.

Actors who have played the “short, stumpy Roman Catholic Church priest, with shapeless clothes and a large umbrella”, have included Sir Alec Guinness, Kenneth More and Andrew Sachs. In the current BBC adaptation, the role is taken by Mark Williams.

In the second series of Father Brown broadcast in 2014, its audience reach was almost 25% of the afternoon TV viewing audience (1.9m).

The show is a co-production between BBC Worldwide and BBC Drama Production and is made by BBC Birmingham Drama Village.

Executive producer Will Trotter describes it as “compulsive viewing” for BBC One Daytime.

“The success of this second series has proved that viewers have really taken Mark Williams as Father Brown to their hearts,” he says. “We are delighted that we can continue to bring such a well-loved character to life.”

Father Nye entered the Society of Jesus (the Jesuits) in 1955 and was ordained as a priest in 1966.

“The scripts were set in the 1950s,” he says, “and I tried to make sure they were as faithful to pre-Vatican II as I remembered those times, through my comments and requests for changes. Especially important was to make the drama authentically Catholic on theological points, such as use of the confessional, prayers for the dead (there would be a number of corpses lying about!), the use of Latin and of the Douai Bible when Scripture was quoted.”

Certain Anglican terms such as ‘vestry’ had to be changed to ‘sacristy’, Fr Nye noted; and the old village church, which was used as a location, had to have old monuments covered up to make it more authentically a Catholic church.

“Having watched the episode on TV, I found Father Brown real and acted by Mark Williams in an engaging and understated way, by no means a caricature,” he says.

“His cassock and soup plate hat wouldn’t be the regular gear of many priests of the time, but I let that pass for its dramatic value of character recognition. And the atmosphere was suitably 1950s, something the BBC does very well. The plots may not have been Chesterton, but they made pleasant afternoon viewing.”

The Father Brown of GK Chesterton’s short stories not only carries out his normal duties as a Catholic priest: he also gets involved with solving crimes.

In ‘The Man in the Shadows’, the first episode of series three (broadcast on 5 January 2015), Father Brown gets involved with MI5, which places fellow villager, Lady Felicia, in a compromising situation.