Jesuit to speak on ‘Making Good Decisions’ in Knock 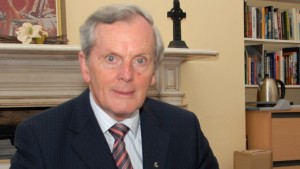 A new one-day workshop exploring the dynamics of Christian decision-making will take place at Knock Shrine later this month.

Well-known Jesuit theologian and author, Fr Brian Grogan SJ, will deliver the workshop, which is called ‘Making Good Decisions: A Beginner’s Guide’. The workshop is based on Fr Grogan’s latest book of the same name.

Speaking about the book recently, Fr Grogan said it is aimed at anyone (Christian or other) interested in making wise choices, be they individuals or part of a group or community.

The dynamics of decision-making are clearly presented, but they are enriched by being set in the context of authenticity as well as Christian living.

According to Fr Grogan, “The content covers a wider ground than is usually considered in books on decision-making because it shows that every decision we make, whether big or small, has its own importance and is to be respected rather than take for granted.”

In his book, Fr Grogan challenges the reader to engage in the decisions made in the public square.

He says that since decision-making is multi-faceted, a different lens is offered to the reader.

Through it they can view particular dilemmas or choices, thereby enriching their grasp of the intricacy of the decision-making process.

Discernment – the art of Christian decision-making – becomes no longer just an occasional event, he says, “but the radical stance of your heart as open to God”.

So for believers the book can be used for prayer, with the author noting, “It would make a challenging companion on a retreat”.

Fr Grogan founded Knock Shrine’s Prayer Guidance Ministry in 1990 and has helped to develop it for the past 25 years.

He is a former president of Milltown Institute of Theology and Philosophy in Dublin and Associate Professor of Spirituality.

He was, for several years, the director and editor of the hugely popular, world-wide, online prayer site, Sacred Space.  He is currently the superior of the Jesuit community in Leeson Street, Dublin.

His other publications include ‘Our Graced Life-stories’; ‘A Spirituality of Ageing’, and ‘Where to from Here? – The Christian Vision of Life after Death’.

He co-authored ‘Meetings Matter: Spirituality and Skills for Meetings’. He was for a number of years the director and editor of Sacred Space, a worldwide online prayer site of the Irish Jesuits.

The workshop which takes place on 19 March costs €30 and includes lunch at Knock House Hotel. Registration is at 9.30am and the day concludes at 3pm.