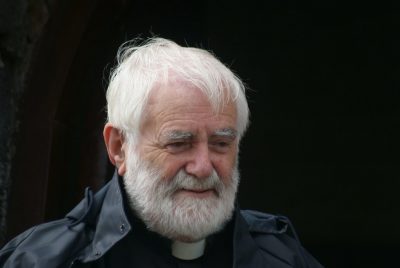 A priest who knew Pope Francis as a young student in Milltown Park in Dublin has celebrated his Golden Jubilee.

Fr Micheál MacGréil marked 50 years in the priesthood with a jubilee Mass at St Patrick’s Church, Aughagower. Michael Neary, Archbishop of Tuam, delivered the homily at the Mass. He thanked Fr MacGréil for his service, and welcomed his family, wide circle of friends and neighbours, and brother Jesuits.

Archbishop Neary said Fr MacGréil had always had a great rapport with those from the Archdiocese of Tuam who studied at St Patrick’s College, Maynooth, “encouraging and challenging them in their studies”.

“When Pope Francis was elected Pope, Micheál acknowledged that Pope Francis had studied in Milltown Park while Micheál was there but he said that he couldn’t remember him,” Archbishop Neary said.

“It has been established since however that the Pope remembers Micheál.”

The celebration of the jubilee of Fr Micheál MacGréil had a three-fold dimension: 40 years in association with the pilgrimage to Mameán; 50 years as a priest; and 60 years as a Jesuit. Fr MacGréil has also been known as a sociologist, campaigner and activist.

Of Fr MacGréil’s time lecturing in sociology in St Patrick’s College, Archbishop Neary said: “Micheál wore his learning very lightly, and it never became a hindrance in his relationship with the people of the west. Micheál was primarily a priest and while he initiated and espoused various causes he always did so as a priest, whether it was prison reform, the Irish language or the western rail corridor.”

The archbishop said the archdiocese was indebted to Fr MacGréil for his work on highlighting the priorities for the Church at a time of rapid change, and detailed in Fr MacGréil’s 1998 publication, titled Quo Vadimus.

He said all of Fr MacGréil’s many publications have at their centre liberation, improvement and the dignity of the human person. Fr MacGréil influenced areas from which the Church has been largely absent – for example, in trade unions. He was a shop steward when he was on the teaching staff in Maynooth.

“He always brought integrity, justice and balance to the causes which he espoused. He never allowed personalities to distract from the central issue,” said the Archbishop. “Even when people who were opposed to him and became rather hostile and personal, Fr Micheál never stooped to that level. Recently, I reminded him that he did so much to influence atheists and was always seen as a close friend of the lapsed atheist.”

The priest restored the pilgrimage to Mameán which now takes place annually on the Sunday after Reek Sunday. He addressed 25,000 Pioneers in Croke Park in 1999 and spoke totally in Irish.

The Archbishop concluded by giving thanks to God for the priesthood and for for the way in which Fr MacGréil has faithfully and energetically lived his priestly ministry.

Fr Charlie McDonnell, from Westport, also spoke at the Mass.

Fr MacGréil was born in 1931 in Co Laois and educated by the Christian Brothers in Westport. He served in the army as a cadette and officer from 1950 to 1959. He studied in Louvain, Kent University, Milltown Park and UCD, from where he gained his doctorate in sociology in 1976.

He lectured in sociology in NUI St Patrick’s College, Maynooth from 1971 until he retired in 1996. He also lectured for a time at UCD.

His memoir, The Ongoing Present: A Critical Look at the Society and World in which I Grew Up, was published in 2014 and launched by comedian Ardal O’Hanlon.