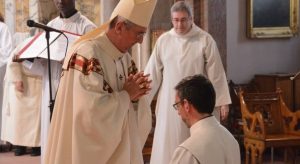 A weekend of celebrations for the Jesuits in Ireland was completed on Sunday with the ordination of Fr Edward Cosgrove to the priesthood by Archbishop Diarmuid Martin at Milltown Park chapel.

It followed the beatification on Saturday of Fr John Sullivan in Gardiner Street church in a ceremony led by Cardinal Angelo Amato of the Congregation for the Cause of Saints.

Referring to the previous day’s celebrations, Archbishop Martin recalled Cardinal Amato’s words on the two fundamental dimensions of the life of Blessed John Sullivan as a Jesuit priest – his practice of poverty and obedience.

Archbishop Martin urged the newest member of the Jesuit community in Ireland to always allow these to be dominant in his life.

Fr Cosgrove is a native of Dromahair, Co. Leitrim. He was ordained to the Diaconate in Toronto, Canada, last year where he had spent three years studying theology at Regis College, the Jesuit school of Theology at the University of Toronto.

Before joining the Jesuits, he studied engineering to doctorate level and worked as a civil engineer for a number of years in Dublin.

His interest in and contact with the Jesuits came through the Christian Life Community group (CLC). He took some time out to volunteer with Jesuit apostolates in social outreach programmes, and also to complete an MA in Applied Christian Spirituality.

Fr Cosgrove entered the Jesuit novitiate in Birmingham in 2007 and made his First Vows in St Mary’s Church, Harborne, Birmingham on 5 September 2009.

He studied philosophy at Heythrop College in London and later completed two years of Regency (part of Jesuit formation) in Galway, where he was part of the chaplaincy team at Coláiste Iognáid and also taught religion and mathematics.

Among the Jesuit apostolates he assisted as part of his formation were Magis young adult ministry and Gardiner Street Parish.

He spent time in Rumbek in South Sudan in 2013 assisting the Multi-Educational Agricultural Jesuit Institute of South Sudan (MAJIS), a project established by the Jesuits of East Africa, and supported by Irish Jesuit Missions.

In his homily on Sunday, Archbishop Martin noted that in our sophisticated, wealthy and celebrity-driven world, “poverty in a priest still touches hearts, while ostentation always alienates”.

He said he was struck by the fact that one of John Sullivan’s first gestures in his growing commitment to poverty was getting rid of his expensive clothing and any worldly ostentation and opting for a life of “radical simplicity”.

“I was reminded that St Francis also began his mission of poverty by selling his coat and donning a simple habit which became a symbol of what ‘being Franciscan’ means.”

Dr Martin warned that whenever ministry loses the characteristic of service it can quickly degenerate into the opposite to ministry, to a “self-indulgence which is the opposite of the spirit”.

Addressing the Jesuit, he told Fr Edward that he was becoming a priest at a new time in the history of the Irish Church.

“My generation may seem to be handing your generation a weaker and more fragile Church, fewer in numbers, weakened by scandal, less credible due to our lifestyle. We look to your generation now to call the Church to renewal and we pray that your ministry will be marked by an ever closer configuration to Jesus Christ and a style of life and spirituality appropriate to your calling.”