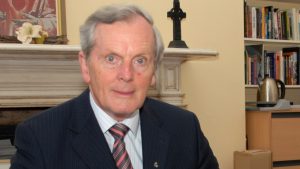 Well known Irish Jesuit, Fr Brian Grogan, has just published a new book which explores the problem of evil and suffering and looks at finding a spiritual response to it.

In an interview with Pat Coyle of Jesuit Communications, Fr Grogan explains that ‘God, You’re Breaking My Heart’ is the fruit of his personal experience of suffering and pain following the death by suicide of his sister-in-law, and his many years reflecting on its possible meaning in a Christian faith context.

In the Jesuit’s view there are no easy answers to the questions that evil and suffering pose to one who believes in an all-powerful, all-loving God. But he believes that God doesn’t really break our hearts.

God does, however, permit them to be broken open, and from this there may come people of love who bring about change in the world, transforming evil and suffering into good.

For Fr Brian, the life, death and resurrection of Jesus, the paschal mystery, is the key locus of this transformation.

He underlines that as human beings none of us will escape pain or suffering or the effects of evil in the world.

The question is – what we do with the pain within us or inflicted from without.

If we do not allow ourselves and our pain to be transformed by the gift of grace, forgiveness and love offered to us by God and exemplified in the life of Jesus, then we are destined to pass on the pain and become part of the problem, not part of the transformative solution.

The book explains how the decision-making process can be wholly transformed once we seek guidance in the divine.

Discernment – the act of Christian decision-making – is no longer an occasional event but a radical stance as your heart opens to God.

In the first part of the book, the 78-year-old Jesuit, who has a doctorate in spirituality from Fordham University in the US, underlines that Christian decision-making relates not only to macro decisions but also the micro decisions of our lives. These small decisions matter because “they shape our attitudes”.

Recalling his own battle with perfectionism, he compares micro decision-making to weight watchers or battling with alcoholism – every calorie you consume or every drink you take becomes important. Small decisions can be important because they set up the attitudes we hold.

While the first part of the book deals with the way the individual can be helped to go about things, the second part deals with group efforts, because, as Fr Brian highlights, the shifts in the world are most often due to group efforts such as how the international community or UN responds to what is happening in Syria and the refugee crisis.

“It tries to be practical and offer examples of where people can work with groups or work together with other individuals who feel the same way as they do, or work from their own Christian perspective within groups that don’t have any particular interest in the Christian perspective but bringing it into play without ever naming it.”

The roots of his own Christian decision-making and allowing God to play a role in his life goes back to the 1950s when he decided to join the Jesuits.

In a recent interview with CatholicIreland.net he explained that “If you were deciding to join a religious congregation you were saying goodbye to marriage, a career, to money – the lot. And so you were trying to make the best decision. You were trying to follow God’s prompting.”

“After two years, we took perpetual vows – in other words we vowed ourselves to poverty, chastity, and obedience for life. I was 18 at the time.”

Sixty years later he is still trying to follow God’s prompting. “I believe God is present in our diminishment. As we get older there are less things we can do. One makes a decision to accept that gracefully rather than resent it or regret it. Enduring of them acceptingly is important.”

‘God, You’re Breaking My Heart’ is published by Messenger Publications and costs €9.99.