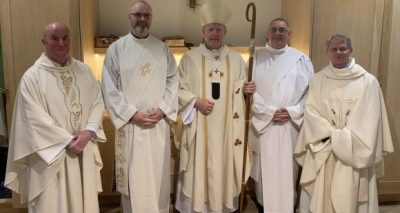 Niall Leahy SJ (second from left) at his ordination, along with Archbishop Eamon Martin (centre) and fellow priests.

Niall Leahy SJ was recently welcomed to the diaconate at a celebration in Co Louth.

The ordination coincided with the 100th anniversary of the laying of the foundation stone at St Oliver Plunkett Church, Blackrock.

Fr Padraig Keenan, parish priest of Haggardstown and Blackrock, said ordinations are much less common in Ireland today than they were 100 years ago.

“But this beautiful and uplifting celebration is a reminder to all that the Lord never ceases to bring new life to the Catholic community,” Fr Keenan said.

Eamon Martin, Archbishop of Armagh, who was present to celebrate the ordination, said that preaching the Gospel should always give hope to the people.

“The Holy Spirit gives life and vitality to the believer, regardless of the effects of age on the body. If anyone wants to retain their youthfulness and enthusiasm for life then they ought to seek these gifts from the Holy Spirit, and not from any cream or chemical!”

Niall Leahy worked as an accountant before entering the Society of Jesus (Jesuits) in 2009. He said that he was happy and grateful to have so many people gather in Blackrock, his home village, to celebrate “the call that is at the heart of my life as a Jesuit.” 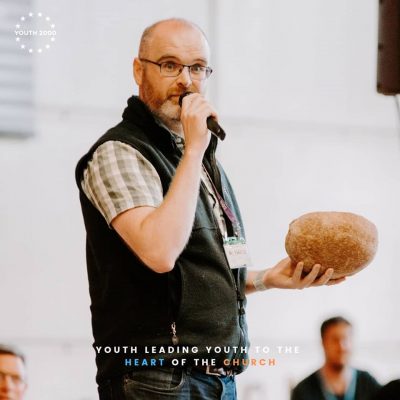 He added that it was a once in a lifetime experience.

Jesuit Provincial Leonard Moloney, friends and parishioners were present for the ordination.

Niall Leahy was born and reared in Blackrock. He moved to Dublin for his education at university and started his working life in accountancy. It was during those years that he became more interested in his faith and started getting involved in the Church.

His desire to serve God led him to enter the Society of Jesus at the age of 27. For a time he worked at Clongowes Wood College, the Jesuit boarding school for boys, where he taught business and French, and was involved in many of the pastoral activities there. His studies took him to Toronto’s Regis College.

In Ireland he was also a familiar face at Youth 2000 events and the organisation warmly congratulated him on his ordination.

He has a love for singing and music. He has been involved in choirs and has written songs of his own.