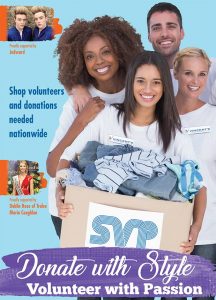 Jedward were in the St Vincent de Paul (SVP) Vincent’s shop in Sean McDermott Street on Dublin’s Northside on Tuesday (3rd October 2017) to launch a national shops campaign for the charity.

Just ahead of their appearance in the new MTV dating show Single AF, the famous Lucan twins, John and Edward Grimes, took some time out to help SVP launch the “Donate with Style, Volunteer with Passion” campaign with the twin aims of attracting goods and volunteers to their shops.

“We urgently need clean saleable clothes that can be distributed throughout our network of shops, men and women’s clothing, winter wear and large sizes are particularly welcome.” said Dermot McGilloway, SVP National Retail Development Manager. Speaking at the launch of the campaign he added that the SVP also needs clean bed linen, curtains, shoes, bric-a-brac, pictures, antiques, collectables and small household items, and some shops also have furniture.

Volunteers are needed for both shops and sorting centres across Ireland, with some of the busier shops needing volunteers for late night openings.
SVP shop volunteers provide customer care, general housekeeping, merchandising, sorting and pricing clothing and other donated items.

Vincent’s shops are a hugely important aspect of the service SVP provides to those who need help. Approximately 130,000 people sought help from the charity last year. Not only do the shops provide goods at affordable prices, they also provide an income source for the Society, which is directed back into the community.

Profit generated by the shops is recycled into local SVP Conferences and contributes to the approximately €35m annually provided in direct assistance by SVP to those in need. Local SVP Conferences often give people Vincent’s Gift Tokens for clothing and furniture to be used in any of the Vincent’s shops. A small number of professionals, assisted by a large number of volunteers; and by community employment trainees manage the Vincent’s shops.