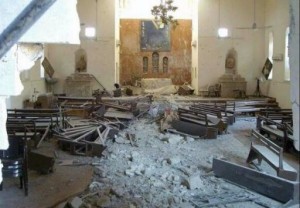 Islamist terrorists belonging to ISIS are reported to have turned a number of churches in the Iraqi city of Mosul into prisons.

According to Fides news service, prisoners are being housed in the church of the Immaculate Conception in the city.

Elsewhere, female prisoners are being held in St George’s monastery, leading to fears that they are being abused there.

The Procurator of the Order of St Anthony Sant’ Ormisda of the Chaldeans, Rebwar Audish Basa, told Fides “The jihadists of the Caliphate have occupied the churches, including those which are very ancient.”

He said there were some concerns that the prisoners and the churches could become targets for any US-led coalition attempt to liberate Mosul from ISIS control because the churches have become logistic bases for the terror group.

“The destruction of old churches would be an irreparable damage and loss,” Rebwar Audish Basa said.

ISIS captured Mosul on 9 June and has been implementing strict Sharia law there.

The city has reportedly been emptied from its Christian population, which numbered over 60,000 before 2003.

Believers have been faced with the choice of converting to Islam, paying a tax or being killed for their faith.