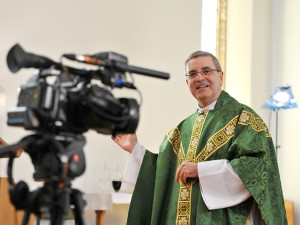 The Dean of St George’s Cathedral in Southwark, Irishman Canon John O’Toole, has been appointed to a high profile ecumenical role in Britain.

Fr O’Toole was born in Dublin in 1950, but his family moved to Chatham in Kent when he was 8 years old.

He has just been appointed as National Ecumenical Officer and Secretary to the Department for Dialogue and Unity at the Catholic Bishops’ Conference of England and Wales.

He also thanked the Bishops of England and Wales for having confidence in him to take on the role. “I am very happy to do so and look forward to meeting and working with my ecumenical colleagues,” he said.

He replaces Mgr Robert Byrne who has been made Auxiliary Bishop of Birmingham.

Responding to Canon O’Toole’s appointment, Archbishop Bernard Longley, the Chairman of the Department for Dialogue and Unity said, “His long experience of working with other churches and ecclesial communities as a parish priest, Director of the Diocesan Christian Education Centre and latterly as a cathedral dean qualifies him well for the work of promoting Christian unity and interreligious dialogue.”

Archbishop Peter Smith of the Archdiocese of Southwark, in whose diocese Canon O’Toole has been working, congratulated him and thanked him for his involvement in the ecumenical movement over many years means.

“He will bring a great deal of experience to his new task in promoting and fostering ecumenical relationships on behalf of the Bishops of England and Wales,” Archbishop Smith said.

John O’Toole attended both Catholic and non-Catholic schools and then went to King’s College, London and gained a BA in history and an AKC (Associate of King’s College) award in theology.

He was ordained priest in 1978 – the year of the three popes.

In 1990, when he was parish priest in Thamesmead, he joined the ecumenical clergy team at the shared Church of St Paul’s as part of the Thamesmead Christian Community – a local ecumenical project involving the Church of England, Methodist, United Reformed and RC Church.

From 1999 to 2004, he was parish priest of St Andrew’s Thornton Heath which hit the headlines when a man went on the rampage with a samurai sword during a Sunday mass, and seriously injured several people.

In 2011, he was appointed to his current post as Dean of St George’s Cathedral, Southwark and became a Canon of the Cathedral Chapter.

Writing about the Cathedral, he said “.. thousands of people still come to this building to pray and worship, to enjoy a peaceful respite from the busy world outside, to listen to one of our concerts, or simply to visit and admire the building.”

St George’s is the seat  of the Archbishop of Southwark, and serves as the Mother Church for the 185 parishes all over South London and Kent that make up the Archdiocese.

St George’s is home to a large and vibrantly diverse congregation, and part of a cosmopolitan community.

Canon O’Toole has been a member of the English Anglican-Roman Catholic Committee (English ARC) since 2001 and is currently also its Roman Catholic co-secretary.

This English group, which works for unity between Anglicans and Roman Catholics, in 2012 set in train a programme of work for five years.

In this project, evangelisation in an increasingly secular society is a key theme. How the two churches can bear joint witness in the area of public affairs (on issues such as the common good as well as other social and ethical questions) is also important.

English ARC informs members of both churches about ecumenical progress already made over the last fifty years, emphasising what churches have in common, and encouraging spiritual ecumenism, with joint prayer and worship liturgies of the word.

It helps the work of the third Anglican-Roman Catholic International Commission (ARCIC) – and reports to the joint meetings of English Anglican and Roman Catholic bishops, every two years.

Canon John O’Toole will take up his new post in January 2015.

The Department for Dialogue and Unity works to foster cooperation with other Christian traditions and other faiths.

It also implements Catholic Church teaching to promote an understanding of the living faith of Judaism and the Jewish roots of Christianity.