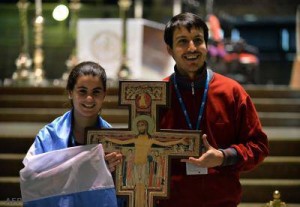 Two young Irish pilgrims attending World Youth Day in Brazil have been selected to participate in one of the highlights of the week-long event which will take place this evening.

Dubliner Maeve Delargy from Mount Merrion in Dublin and Killian Barrett from Teemore in Co Fermanagh, who travelled with the Clogher Diocesan delegation, have been chosen to represent the Irish Church in Saturday evening’s prayer vigil with Pope Francis on Rio de Janeiro’s Copacabana beach.

One million young people will take part in the vigil, which has been changed to the beach location due to heavy rain in Rio over the past three days.

Over 170 young pilgrims from Ireland are in Brazil accompanied by Archbishop Diarmuid Martin and Bishops Donal McKeown and Denis Brennan.

Meanwhile, those who were unable to travel to Brazil are participating in a mirror event in Dublin which began yesterday evening (Friday) in St Mary’s of the Angels Capuchin Church and Homeless Centre on Church Street in Dublin.

The packed ‘Rio in Dublin’ programme is focused on social justice and prayer.

The programme runs until Sunday afternoon, when there will be live links to Brazil for the final Mass of World Youth Day which will be celebrated by Pope Francis. The location for the next World Youth Day will be announced following this Mass.

Throughout the weekend pilgrims in Dublin have been keeping in touch with their counterparts in Rio through social media and live skype and video links.

This evening, participants will walk from four gathering points in Dublin to arrive at Church Street Capuchin Friary where they will enjoy Brazilian music and dancing at 7pm.

Other music over the weekend includes the Dublin Gospel Choir and Teen Spirit.

Throughout Saturday night and into the and early hours of Sunday, pilgrims will take part in prayer vigils from 1am to 4am, with prayers led by the Dublin Brazilian and Portuguese communities and Taizé Dublin.

On Sunday, participants will hear from a variety of speakers, including Brother Kevin, who runs the busy Capuchin Food Centre on Bowe Street, which has seen demand on its services double during the current economic crisis.

Rio in Dublin is an initiative of the Archdiocese of Dublin’s Office of Evangelisation.