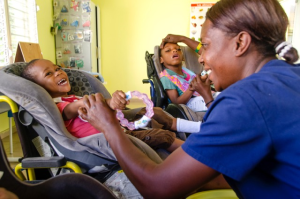 The media spotlight may have moved on but the effort to re-build the fractured country of Haiti goes on.

More than five years after the catastrophic earthquake struck the island nation, it is struggling to escape the cycle of poverty that has created an 80% unemployment rate.

The 7.0 magnitude earthquake didn’t just shatter buildings, and livelihoods, it crumbled the already fragile infrastructure bursting at the seams.

“If you were born in Ireland, you get up in the morning or your mother gets up in the morning, and she can turn on the light and it comes on,” says Gena Heraty volunteer with Nos Petits Frères et Soeur (Our Little Brothers and Sisters).

“If she wants to boil some water she puts on the gas or she plugs in the electric kettle. She has a nurse who can check on the baby or if something goes wrong she can go to the doctor. She doesn’t need to worry.”

“In Haiti, for most mothers around us on the mountains, there are no doctors. Look around you at the mountains, imagine you have a child around you, being pregnant there, and having to walk for miles to get to local transport. Then you have to get to the doctor.”

“There is no follow up care for the kids. It’s very difficult. There’s no social welfare. There’s no medical card. You go to the main general hospital, and if you don’t have money to buy bandages, injections, antibiotics then you are just going to die there.”

Originally from Co Mayo, Gena has lived and volunteered with the orphanage in the hillside village of Kenscoff just 10km from the capital Port-au-Prince for 20 years. 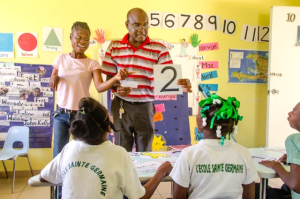 Supported by Misean Cara, the orphanage is a beacon of hope in Kenscoff.

It is a testament to the staff and volunteers who dedicate themselves to providing a home for so many children; psycho-social services to children with disabilities; access to school; and advocating for the issue of disability rights.

She spoke to Newstalk 106 – 108FM’s Susan Cahill in Haiti for a Misean Cara commissioned documentary for the Global Village programme to be broadcast on Saturday, 27 June 2015 between 7pm – 9pm.

The documentary is part of a series that focuses on the issue of statelessness in Haiti and the Dominican Republic.

Gena, and the other volunteers from the Irish volunteer sending agency Viatores Christi provide a lifeline to children abandoned simply because their families cannot afford to feed and take care of them.

“We have over 300 children living here, and one population of 30 – 40 children who are disabled with special needs.”

“With a regressed life expectancy of just 62.7 years as compared with Ireland’s 80.9 years, Haiti’s development has stalled. Unfortunately during difficult times those most vulnerable suffer the most, and for Haiti’s children they bear the brunt.” 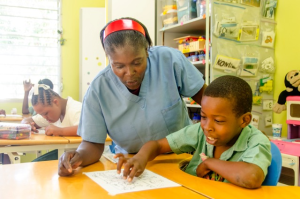 “Whenever a child dies as happens, we can accept a new childlike little Finnega,” says Gena, “she was abandoned in our hospital when we had found her. Before that she had been abandoned in another orphanage, and she had been in a coma. One side of her body is paralysed, she does have the paralytic function, and that probably happened when she was in the coma.”

“In order for her to survive she had to be taught how to survive. You can imagine that if someone is picking on you, which was what was happening to her, she was very distrustful.”

“In a very short amount of time she transformed. Her face went from being suspicious, sad and serious to smiling, happy and bright. She’s very affectionate. She’s a very smart girl, and now she is going to school. Before she would never had the chance to go to school. She loves her copy book and writing and stuff like that. She has great potential, and the most important thing is that she has been accepted.”

“One of the challenges of life is how you respond to crises. Loss and despair can be overwhelming but making a concerted effort to turn darkness into light has been Gena’s greatest achievement. The earthquake took one of her colleagues, and many people from her community. Gena did not lose hope, and she has been working ever since to turn the potential she sees everyday into reality that will transform the country.”

“I always have hope. I think it will take time. If we look at the big picture we would go a little bit crazy but for me the hope is that every person who comes in front of you in any given time be present to that person, and do the best that you can do. We have more roads than ever, and we have more electricity than before.”

“My hope is that with infrastructure we will get more stability, and we’ll get more investment in the country. That is what we need. The people of Haiti for me are very capable, and they are hard-working.”

“For me it takes two things: first of all love – you can’t do anything without love, and from love comes your commitment; investment – whether it’s investment in yourself personally or investment of people putting their money in.”